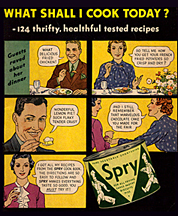 As part of our ongoing look at old advertising slogans, culled from a 1949 book called American Slogans, we today feature a collection of slogans that were utilized by companies that manufactured and marketed various foodstuffs, including condiments, sauces and a strikingly large number of salts and marmalades.