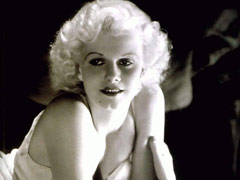 We’re not a bit happy about it, but we’re not likely to make it to Los Angeles in time to take in the Harlow at 100 exhibition at the Hollywood Museum, but that’s no reason you shouldn’t endeavor to experience it.

It’s hard to imagine, given the success Jean Harlow experienced and the level of influence she still has, that she lived to be only 26. How many of Hollywood’s most beloved stars would still be remembered today if their careers had come to a tragic end at age 26? Very few, we’re convinced (though one could argue that the legacies of certain actors, e.g. James Dean and Marilyn Monroe, have actually been bolstered by their premature deaths).

Jean was born Harlean Harlow Carpenter, the daughter of a Kansas City dentist and his wife.

Her mother, born Jean Poe Harlow, resented her arranaged marriage to Harlow’s father and requested a divorce, which was granted in 1922. Months later, Jean and Harlean moved to Los Angeles, as Jean (the mother—confusing, no?) had designs on an actingc career, and like many a frustrated parent, she passed (forced) her dreams on to her daughter.

Mother and daughter returned to the Midwest within a couple of years. Harlean was eventually enrolled in the Ferry Hall School (now known as Lake Forest Academy) in Lake Forest, Illinois, where she eventually met Charles “Chuck” McGrew, heir to a family fortune and six years her elder.

The two were married in 1927 and moved to Beverly Hills, as Chuck sought to put some distance between Harlean and the overbearing mother Jean. But it was to no avail. The story goes that when young Harlean drove a pal to the Fox Studios for an audition, she herself was encouraged to audition. After spurning overtures from Central Casting, Harlean’s pal and Mother Jean, who had since moved to L.A., goaded her into registering with Central Casting. She did, under her mother’s maiden name, Jean Harlow, and the rest, as they say, is history.

May we pause here to reiterate how much it pains us that we’ll likely not find ourselves in Southern California in time to take in this exhbition?

The Hollywood Museum sits right in heart of Tinseltown, at Hollywood and Highland, in the historic Max Factor Building, within walking distance of Hollywood’s oldest restaurant, Musso and Frank Grill; Hollywood’s first pizzeria, Miceli’s; the legendary and still fabulous Grauman’s Chinese Theatre; the Hotel Roosevelt, site of the first presentation of the Academy Awards; and so many other movieland attractions.

The exhibition is scheduled to run thorugh Sept. 5, 2011. If you’re within striking distance of Hollywood and have an affection for Hollywood pictures of the 1930s, you’d be a darned fool to miss it. 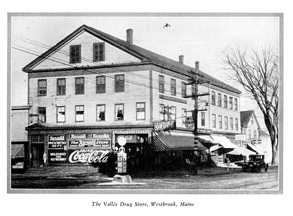