As of now, we’re all spooks all the time here at Cladrite Radio. We’re playing nothing but songs about murder and mayhem, ghosts and goblins, but the ghoulish fun ends soon, so listen while you can.

Speaking of Halloween on the radio, OTRCat.com, purveyors of old-time radio programs, are offering an assortment of spooky shows free of charge (they offer many more collections of shows that you can pay for, if you’re so inclined). The free shows run the gamut from adventure to mystery, horror—even comedy.

Here’s a sample program, an episode of Inner Sanctum starring none other than Boris Karloff.

As of now, we’re all spooks all the time here at Cladrite Radio. We’re playing nothing but songs about murder and mayhem, ghosts and goblins, but the ghoulish fun ends soon, so listen while you can.

Speaking of Halloween on the radio, OTRCat.com, purveyors of old-time radio programs, are offering an assortment of spooky shows free of charge (they offer many more collections of shows that you can pay for, if you’re so inclined). The free shows run the gamut from adventure to mystery, horror—even comedy.

Here’s a sample program, an episode of Inner Sanctum starring none other than Boris Karloff. 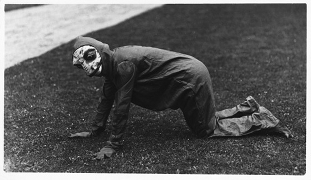 We’ve come across a few vintage Halloween photos over the years, and we’ve always found them compelling and not a little creepy.

But we’ve never seen a collection the likes of the one British musician Ossian Brown, formerly of the band Coil, has compiled. In his new book (new to the U.S., that is—it came out in England last year), Haunted Air, Brown shares images from Halloweens past that span the years 1875–1955, and you can take it from us (and Brown), Halloween ain’t what it used to be. 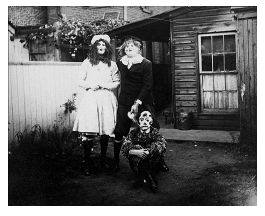 These images manage to both delight and chill. We can’t promise you won’t have nightmares after viewing them, but we expect you’ll find it difficult to stop looking.

No less an authority on strange and unsettling art than David Lynch wrote the book’s forward, which tells us all we need to know, really.

We looked for a slide show from the book that we could embed here for your enjoyment, but alas, we didn’t come up with one. Instead, we’re providing links to three different proprietary slideshows that should whet your appetite. We’ve already ordered our copy; we suspect many of you will follow suit. (If you are so inclined, just click the book’s title a couple of paragraphs back or look for the Amazon widget in the lefthand column; if you do, we’ll benefit a bit from your purchase, and as always, we appreciate your support.)

Halloween is upon us, a time when we’re reminded that sometimes less is more, that suggestion can sometimes be more effective than graphic representation.

Which is why we appreciate that the good folks over at OTRcat.com are again offering free streams and downloads of a handful of old-time radio programs, each with a Halloween theme. No graphic violence or gore for us, please. We prefer to shudder in our seat due to a sense of creeping dread rather than leap out of it in reaction to some shocking bit of cinematic violence.

Here are horror and mystery programs—Inner Sanctum, Quiet Please, and Suspense, among others—and even an episode of the popular comedy show The Great Gildersleeve.

And if you find listening to these few frightening offerings whets your appetite for more, now’s the time to take the leap, as the folks at OTRcat are offering their collections of scary programs at 20% off. We’re not certain just how long the savings will last, so hurry over.

We’ll share with you one of our favorites among the programs available at the site, an episode of The Whistler, a series that ran from 1942 until 1955 and was adapted into a movie series starring Richard Dix.

As we’ve said before, we have nothing whatsoever to do with OTRcat.com; we certainly don’t make a dime from promoting the site and its wares. We just like their product and the fact that they’re willing to occasionally give away some of what they’re selling. Anyone who introduces more people to old-time radio is okay in our book. 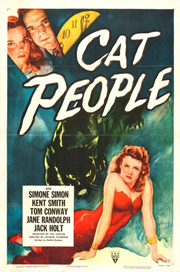