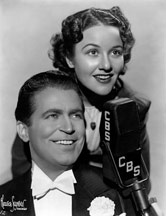 It’s remarkable that until just a few days ago, we still had an orchestra leader from the golden age of the big bands among us. Orrin Tucker, whose first big hit was his 1939 recording of a World War I-era hit, “Oh Johnny, Oh Johhny, Oh!” with “Wee” Bonnie Baker on the vocals, passed away on April 9 at age 100, and it could be argued he was the last living bandleader of prominence from those halcyon days.

The Tucker outfit wasn’t a hard-swinging ensemble. His was an old-style dance orchestra, playing music everyone—not just jitterbuggers and lindy hoppers—could cut a rug to. And aside from time spent serving in the Navy during World War II, he remained an active orchestra leader into the 1990s. That’s quite a career.

“There were so many musicians that said, regardless what the public wants, I’ll play the way I want to play,” Mr. Tucker is quoted as saying in the Washington Post’s obit. “I’ve always tried to play the music people are fond of and play it the way they want to hear and the way it is easy to dance to. I made it a point to know what the public liked and did my best to please them.”

Tucker was born on Feb. 17, 1911, in St. Louis, Mo. His childhood was spent in Wheaton, Ill., near Chicago, and he grew up intending to pursue medicine. But he worked as a saxophonist and singer while attending North Central College in Naperville, Ill., and proved successful enough at it that he formed his own orchestra.

The National Association of Music Merchants conducted an interview with Tucker in 2003 as part of their oral history program, and in the following clip, Tucker, still looking handsome and seeming pretty darned sharp at age 92, recalls working with Bonnie Baker. (Our thanks go out to the good folks at NAMM for allowing us to share the clip with the Cladrite Radio clan.)

And here are three tracks for those not familiar with the sounds of the Tucker Orchestra. “Drifting and Dreaming” was the band’s theme song, “Oh Johnny” was, as mentioned above, the outfit’s first hit, and “You’re the One (for Me)” is just a song we like.

“Drifting and Dreaming” — Orrin Tucker and His Orchestra

“Pinch Me” — Orrin Tucker and His Orchestra