In Your Hat, pt. 6 ⋆ Cladrite Radio
Skip to content

Here’s Chapter 6 of In Your Hat, the 1933 tell-all memoir by Hat Check Girl to the Stars, Renee Carroll, in which she reflects on her salad days and shares a true-life gangster chronicle, a tale in which she finds herself playing an unexpectedly key role.

WHEN people write of themselves as having been born on the lower East Side of New York, they hope you’ll overlook the fact and think of the place and the occasion as something to forget. But I first saw light on the lowest East Side with a couple of big Jewish mammas doing things to a couple of herrings in the kitchen and a bearded gentleman or two sucking tea through lumps of sugar they held between their teeth. Taking advantage of my birth by sponging on the family for a meal!
Specifically it was a Friday, the day on which all my troubles subsequently descended, and the street was Madison, in honor of a president. The bawling infact raised a yell in the improvised crib and my father, than as now, an orthodox rabbi, descendant of a line of rabbis, muttered a prayer that his daughter would be a healthy and obedient child who would honor her parents and bring only happiness to Madison Street. Or maybe I’m wrong. I suppose a more sensible translation would be: “So if it can’t be a boy, it can’t be. And she should marry wealthy because where would a rabbi get anything resembling a dowry for his daughter?”
From early girlhood I learned that life was a serious bowl of cherries. It’s all right for Eddie Cantor to reflect on his East Side upbringing with a great deal of sentimentality. Eddie has lost two million dollars since then—I haven’t saved two hundred. I’m the unique case of a lower New York birth with nothing to show for it but an aversion for dialect stories and a strawberry mark on my hip.
I attended classes in Public School 62 and soon after I left they tore it down for a new subway. I didn’t exactly hate school, but when I heard that they were ready to tear down the building, I could honestly say that I threw the first stone—right smack through the window of the room where arithmetic gave me nightmares.
Later when Jews found it fashionable to migrate to outlying districts such as Brownsville, Flatbush and the Bronx, my family found itself doing likewise because trade follows the flag, and the trustees of my father’s synagogue decided that it would be advisable to move to 115th Street.
Once uptown the flyaway bug began to tell me stories and it occurred to me that there was nothing except the tradition of the home and keeping the family intact and all that sort of clannish business, to keep me from striking out on my own.
My family wanted me to go to college and become a lawyer, but I figured that Portia had had a tough enough time and that men won’t listen to a women except when her legs are crossed, so I thumbs-downed that idea. Business college had a momentary appeal and I attended a business school and learned how to type. With this equipment I decided to flee the camp. 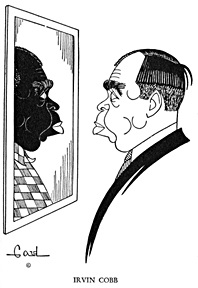