In Your Hat, pt. 4 ⋆ Cladrite Radio
Skip to content

A LOT of dirt gets swept by my little booth in conversational blobs that can’t stand light from the printed page, but at the same time I frequently pick up little stories that’ll bear repeating.
I don’t say I chum around with Broadway’s best, but I know most of the crowd by their given names and I’m usually calling a spade a spade even if it’s Bill Robinson. What I crave most is respect because nowadays that’s all a girl gets that doesn’t draw interest.
But now and then somebody whispers a yarn that’ll stand repeating, and chum or no chum, it has to be given up, which reminds of the time Herr Ernst Lubitsch (the little man with the big cigar) was directing a picture at the Paramount New York studio in Astoria.
It happened that Claudette Colbert, she of the extraordinary limbs, and Miriam Hopkins, who is now a Paramount star, were in a picture together with Maurice Chevalier.
In the story Chevalier is supposed to be married to Miriam, but because she is more or less of an ugly duckling, he is particularly fond of the more comely Claudette. The story develops to the point where Claudette is caught by Miriam in her own house. It develops into a verbal bout and then rapidly into a slapping match in which both girls are supposed to slap each other, cry a bit, and then make up. The slaps, like most of the blows in pictures, were supposed to have been pulled punches. But were they? Oh boy, no! And behind that is something of a story.
It happened that in the making of the picture Herr Lubitsch became more or less attached to the luminous blonde Miriam. He believed in her as a noble actress, a conviction that has been justified since, and Ernst was interested in her sparkling personality. While the picture was being made, the two of them were seen around town together. Lubitsch would take her down to his favorite Second Avenue restaurant for some calves’ brains and wine, and Miriam was having a swell time, particularly when she worked, because Lubitsch was developing her part more and more every day.
Pretty soon Claudette began to sense the fact that in spite of her billing as a leading player opposite Chevalier and despite her rôle as the heroine of the piece, little Miriam was stealing the picture out from under her very nose.
Naturally she resented the intrusions and sensed the possibility that she might be a minus quantity in the finished film. Slight differences arose every day,—everyone felt that a blowup was due any second.
Well, the opportunity finally presented itself on the day that the slapping scene was to be shot. I suppose both girls felt that for once, at least, the microphone would get an authentic record of what slaps can be like.
Both girded themselves for the fray. If there was to be any serious slapping they were both out to do it. The studio sensed the situation and everybody turned to do honor to the winner. The scene was the bedroom of the princess, and the slapping took place while the two women were seated on the edge of the bed. After the blows were delivered they were supposed to break into tears and then fall into each other’s arms in forgiveness. Everything went fine and the two ladies were eyeing each other as fighting cocks do before being released.
Lubitsch knew that something was going to happen, but he purposely encouraged it because it lent authenticity to a scene that might not appear real on the screen. Famous fights of screen history started when those two fellows mised it in the first screen version of “The Spoilers,” but never before the cameras—that is, a battle with physical effectiveness. Hair-pulling was a sissy’s game now.

The director called for silence and the signal for silence in the studio was sounded. Everybody waited around expectantly. The contestants kept their gazes on the carpet waiting for the gong to go off. Lubitsch gave the signal to start and the motors began turning the cameras and the diaphragm opened its delicate ears for film-sound.
Only a few minutes before this scene was to be shot the two actresses were rehearsing another scene at a piano. Claudette was to play the piano in a jazz tune and Miriam was supposed to pick it up and go into some sort of musical ecstasy, the idea being that she had found freedom from her old-fashioned self.
La Cobert played—that is, Johnny Green, the young composer, played on the sidelines, while Claudette made the motions on a dummy piano, and Miriam listened attentively. Suddenly, for no apparent reason, Claudette flared up. In a typical movie heroine fashion she blared:
“Jeese, Miriam! You’re not doing much to help!”
“I’m doing what I’m supposed to,” Miriam answered.
“Like hell you are!”
Lubitsch answered in time.
“Now plizz, gurruls, vee haff not much time.”
The rehearsal ended there with the two ladies glaring at each other and Claudette wandering off saying “Jeese” over and over to herself.
Now the slapping scene was being shot and the dialogue for the scene began. It ran something like “I’ve caught you trying to steal my husband’s love for the last time,” and “Well, I can’t help it if he loves me instead of you.” Then Miriam was commissioned by the script to slap Claudette.
The first offense was carried out successfully. The slap was delivered with such accuracy of aim and precision that the man in the sound booth immediately turned down his receiver to record the following blows. Claudette responded nobly with a sock to Miriam’s jaw that almost knocked the little blonde over onto the cushions. Then Miriam came back with a slap that jarred the brunette so that for a moment she forgot to retaliate. But answer she did with a crack on the other’s face that left a vivid hand-print showing through the makeup.
The shock of the slapping had for the moment just stunned the girls, but now it was beginning to have a more drastic effect. Both burst into tears. They cried so realistically that the bed shook violently. Lubitsch watched everything from the sidelines and his expression at first was one of concern, but later he looked on in amusement betting with himself as to the outcome. He realized he never could get a scene like this one again, and he let the film run until the spool was empty.
The slapping continued a while longer until both girls had vented their anger and then, according to the script, they were supposed to dry their tears and make-up. This they did and at the conclusion, looking up suddenly to find a gallery of spectators had gathered to enjoy the scene, walked sheepishly to their respective dressing rooms. It was Miriam, in the end, according to the critics, who stole the picture. 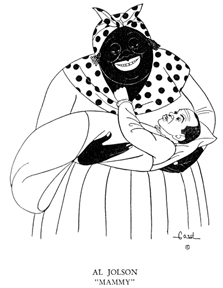