Hollywood Undressed, Chapter Ten ⋆ Cladrite Radio
Skip to content
The tenth chapter from Hollywood Undressed, a 1931 memoir attributed to the assistant of masseuse and health guru Sylvia Ulback, a.k.a. Sylvia of Hollywood (but actually ghost-written for Sylvia by newspaper reporter and screenwriter James Whittaker), relates how silent vamp Carmel Myers came to be thought “high-hat” by the rest of Hollywood and how Sylvia came to sign an exclusive service contract with Gloria Swanson. 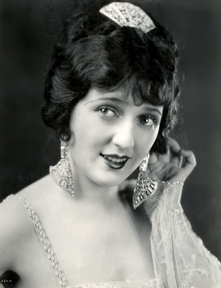 was making her United Artists pictures on the Pathé lot, as what you might call a paying-guest artist. In other words, Joseph Kennedy, her production manager, paid the Pathé people for the privilege of using the Pathé stages. So Gloria was in the position of star boarder in the old colonial homestead—and never was star boarder treated better than was Gloria by everybody, from highest executive to humblest doorman, on the Pathé lot.
As has been mentioned, the entrance to the lot is a curved driveway leading up to the executive offices in a building of colonial design. There was a tacit understanding, which the old gateman administered like a commandment carved in stone, that Gloria was the only hired hand whose car had the privilege of passing the grilled gates and depositing its passenger in the pillared portico.
On the day and the minute of Carmel Myers’ arrival before the Pathé doors, Gloria’s car happened to shoot out of a side street and dash through the quickly opened gates. Carmel, who was about to get out of her car and start up the driveway on foot, saw the gates swing open and, breathing a sigh of relief, sank bank in her seat and ordered her chauffeur to follow the other car in.
The old gateman almost fainted when the strange car dashed past and up the drive. He gesticulated and howled. But by this time Carmel was out of her car and across the porch into the Pathé building. Poor Carmel never knew, until some time afterward, that she had been guilty of a crime of desecration. Who did she think she was—Will Hays or somebody? That was what the scandalized people on the Pathé said.
A few weeks later, Carmel was lying on the slab in our back room resting up from a treatment. It’s the moment for confidences in a massage parlor. Lying there with all the bones loosened up, the patient’s jaw gets likewise and begins to chew over the secret troubles.
“Sylvia,” says Carmel all of a sudden, “have you ever heard them say that I’m high-hat?”
Well, the boss had to admit that that was just what she had been hearing. In fact, the patient before Carmel had been telling Sylvia all about the Pathé-lot incident, and how Carmel had dared to use the motor driveway for motor driving.
“So you heard about that, did you?” said Carmel, and told her tale of woe.
“It just goes to show how you can get judged unfairly,” she started, and told how she had followed Swanson’s car up the driveway without giving a thought to whether it was correct or not. “In fact”—she took that back—“I did wonder whether I ought to or not, but look!”
And Carmel peeled off her stocking and showed Sylvia a sore foot.
“It’s an ingrown toenail!” wailed Carmel. “And two days before I went over to Pathé, the pedicure cut it open. I was going around with one shoe, and it hurt like toothache every time I put my bum foot down. Before they opened those gates for Gloria’s car, I was sitting there in my car just crying—thinking about walking up that nasty long drive. And when those gates opened I didn’t hesitate: I just told the driver to shoot on in.”
And that is the true story of how Carmel Myers, because of a sore big toe, got known as a case of big sore head.
For the sake of the point, I’ve got a little ahead of the order of events, which should begin with one fateful week-end in the earliest days of the talkies, during which Sylvia was offered and took the contract to do her thumping and mangling exclusively for Pathé.
The general hysteria among the movie stars that accompanied the advent of sound in the movie industry had a lot to do with the sudden change in Sylvia fortune’s. Those were the days when the fate of every star was in the balance. And the dear girls knew it. The Marne for everybody, and how they all fought! The favored tactics were to hunt for allies—vocal teachers, elocutionists, voices placers, and what not. Names since forgotten leaped into prominence—Italian names mostly, of teachers of bel canto.
In the midst of all this nonsense one star kept her head—Norma Talmadge

. While the rest were all signing up Italians and Frenchmen and Spaniards to teach them how to speak the English tongue, Norma quietly sneaked off to New York and came back to Hollywood with Laura Hope Crews, cultured and expert product of the Broadway stage. And instantly everybody knew that Norma had bagged big game while the rest of the sorority had been busy bringing down sparrows. Miss Crews came out to coach Norma in her first talkie.
Meanwhile, Gloria Swanson had been holding off. Smart enough to see that the others were throwing away their good money on quacks and fakes, but still bewildered by it all, Gloria simply did nothing. Incidentally, though, she worried enough to etch a few lines in her face and increase her girth by a few inches. (Worry, says Sylvia, is the prime cause of overweight in most cases.)
The date for starting work on Gloria’s first talkie, Edmund Goulding‘s “The Trespasser,” was fast approaching, and Gloria had still done nothing about correcting the lisp that was characteristic of all old-line movie stars in their first essays before the microphone—and also nothing about getting into physical condition.
It’s like Gloria to put off decisions until the last minute, and then make them suddenly—and right!
She went to Norma Talmadge to ask for the “loan” of Laura Hope Crews. And she moved to get Norma Talmadge, Gloria was open and honest. She went with Edmund Goulding, who knew Miss Crews, and the two of them put up to her and Norma Talmadge a request that the former might supervise the dialogue of “The Trespasser.” Miss Crews took a shine to Gloria, Norma Talmadge gave her blessing, and the Crews-Swanson association was launched.
Gloria played fair with Norma Talmadge. In the course of developments, others did not similarly play fair with Gloria.
Then, instead of an elocution lesson, the first thing Laura Hope Crews gave Gloria was advice to get in physical trim, and to that end to hire Sylvia. The call for the boss came on a Saturday night and, as usual, was given like a three-alarm. It was Gloria’s secretary on the phone—and Sylvia simply must come over right away (the hour being 10 P.M.
Well, you don’t turn down Gloria Swanson. The boss beat it over to Gloria’s famous house on Sunset Boulevard.