Hollywood Undressed, Chapter Nine ⋆ Cladrite Radio
Skip to content
The ninth chapter from Hollywood Undressed, a 1931 memoir attributed to the assistant of masseuse and health guru Sylvia Ulback, a.k.a. Sylvia of Hollywood (but actually ghost-written for Sylvia by newspaper reporter and screenwriter James Whittaker), relates how Sylvia found herself in the middle of a whirlwind (if short-lived) romance between actress Ina Claire and matinée idol John “Jack” Gilbert. 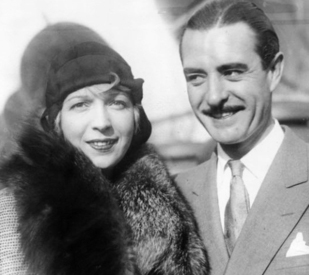 TO GET back to Ina: She moved presently into a house in Beverly Hills and, about the same time, began to be rushed by Jack Gilbert

.
Jack, one day, called Ina “boyish,” meaning it as a compliment—meaning that a tomboy was to his taste. Right away, Ina began to worry a bit—because Jack’s calling her a tomboy didn’t prove anything except that he was maybe nearsighted. True, she has square shoulders and a husky, boyish voice, but at the time she was wearing a few curves that were about as masculine as a bustle. And sooner or later Jack was bound to watch her going up some stairs or something and wonder what on earth had ever made him think she resembled a boy. But a woman in love isn’t stopped by anything so temporary as a fact. Ina had a heart-to-heart talk with Sylvia and said she didn’t care how much it hurt, she wanted to get spanked loose from about ten pounds of accumulated femininity.
In a little while, Ina’s campaign developed to a point where she decided for a show-down. And she selected a certain evening as the zero hour. On that evening there was to be a big masquerade ball given by Basil Rathbone

first call on her services, with the other Pathé stars taking whatever time Gloria did not demand.
Well, Ina was one of those who decided not to take Gloria Swanson’s leavings. She did not come near Sylvia’s workrooms on the Pathé lot.
And then, presently, Gene Markey came out to Hollywood, apparently cured of infatuation for the belle who had given him such a tough break. Gene unconsciously published the fact that he was cured in the way that would annoy Ina the worst. He turned up as one of Gloria Swanson’s gallants and paid Ina’s Pathé-lot rival open and assiduous court.
It’s only feminine for a women to expect a discarded lover to go and picturesquely pine away somewhere. And when Gene perked up so rapidly and began to part his hair and carry flowers to a new shrine, why, Ina got miffed.
Somebody had to be the goat. Sylvia was elected, and has suffered under a degree of banishment which has deprived her of Ina as a patient ever since.