Charles Ray was a popular juvenile star in the 1910s and ’20s, but by the ’30s, his career was on the rocks, and he turned to writing. Here’s another in a series of offerings from his book, Hollywood Shorts, a collection of short stories set in Tinseltown.
*    *    *
Stunt Man
Jim Warren wasn’t a stunt man, but he lied rapidly and said he was in order to get the job. A sick mother and a desperate need gave him courage to say “yes.”
The director sauntered up and down the river bank, inspecting different photographic angles which seemed inspiring to him. Finally he stopped abruptly in front of the aspirant.
“Where have you worked?” he asked Jim Warren quickly enough to addle him. “What have you done?”
“Why—why, I jumped off a precipice on a wooden horse,” Jim boasted, describing a stunt he had seen on the screen. “Everybody at the U said it clicked okay. Didn’t you catch the picture?”
A little preoccupied, the director nodded.
“That kind o’ stunt don’t take nerve,” Jim assured. “It’s knowin’ your business. It ain’t goin’ into a stunt that’s tricky. It’s how you figure your come-out. You gotta know your business,” he concluded, and spat to emphasize his last remark.
After a long puff at his cigarette, the director gave a noncommittal grunt and moved away. After setting his cameras advantageously along the water’s edge, he went to confer with the company business manager.
“I don’t know why, but this stunt man has me worried,” he protested. “He seems nervous.”
“You’re a chicken-hearted director.”
“Don’t kid.”
“All stunt men are as nervous as prima donnas,” the manager said with an artificial laugh. 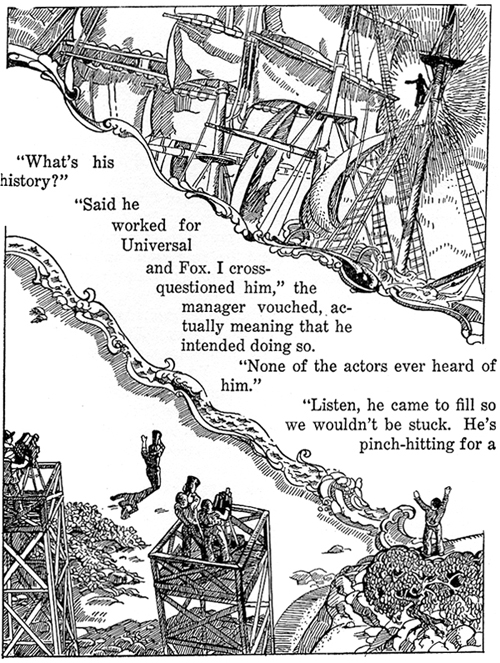 guy we engaged—on account of illness. Now are you satisfied?”
“Yeah? And we’re way out here in the wilds and can’t check on him.”
For a few moments the two argued fiercely.
“Plenty else to worry about,” the manager flared. “We either shoot this stuff now or the day’s lost. That’ll mean eighteen hundred dollars, because there’s nothing back at the studio that we can do.”
“But if the lad muffs, he’ll never live to answer any more questions. Why take a chance?”
“I say shoot!”
“The blood’s on your head!” The director lifted his voice for the benefit of his staff. “And get this: I shoot this scene under protest!”
A four-master had been towed into the mouth of the river. The ship was anchored to be silhouetted against the morning light. Harsh waves were slapping its sides, and whirling eddies rocked its masts wildly.
With a shrewd eye, the director commanded the attention of the would-be stunt man.
“Now I’ll explain once more,” he began carefully. “You climb to the top of the first mast. Take your time. Get set and balanced properly, so when you dive you’ll clear the deck easily. Swim under water to about this point.”
Clearly he indicated the range of the cameras.
“We want plenty of footage before you come up,” he continued. “That idea is that you’re lost, giving us plenty of suspense. Understand?”
“Right.”
“That’s it, then. Now do you still think you know what you’re doing?”
“Don’t worry about me.”
“Then it’s ok. We’re ready when you are. Take your time. Get plenty of breath. You’ll need it. And when you feel ready to dive, you give us an advance cue by waving your hands in the air. We’ll grind on that signal.”
Shaking knees cracked under the strain of climbing the rigging. Jim’s nervousness mounted with the minutes. The tarred rope cut into his palms while the weaving mast bent to and fro furiously, resting for moments at horrible angles. The swerving, sagging rigging demanded leech-like security which sapped his strength, and the violent rebound went taut with a snap that all but sent his body catapulting into space—a stunt in itself for any sailor.
What seemed to be the utmost composure to those below on the river bank was merely waiting moments to Jim. With arms and legs wound tightly about the ropes at the top, his mind argued furiously concerning a descent, abandoning the stunt, and the humiliation he would suffer if onlookers saw him climb down again.
Minutes passed.
“What the hell is the matter with the goof?” the company manager grunted through set teeth.
“Why don’t you go up and show him how it’s done?” the director flung back sarcastically. “I told him to take his time.”
Two arms suddenly shot into the air at the top of the mast, and a shout of approbation echoed along the river bank.
“Grind!” came the command from the director.
The tiny figure at the crow’s nest left the rigging in the neatest dive that any Olympic contestant could present; but half-way down the hundred-foot descent, Jim’s body careened. His kicking legs had no effect in an effort to right himself, and struck the water ungainly, violently.
Breathless moments passed. The cameras rolled on.
The chief camera lifted an index finger, indicating a hundred feet of film.
“That’s over a minute!” the director yelled. “That boy hasn’t come up yet! Everybody run along the bank for sight of him. Live preservers ready! Ropes ready! Help!”
Frantically the prop man ran down the river bank, distributing paraphernalia to hurl into the water on sight of a struggling body.
Seconds passed into another minute.
Consternation reigned. Orders were shouted, and orders were ignored while everyone peered down into the opaque water.
The passing of another minute caused vibrations anguish to surge through the onlookers. Hope faded rapidly into oblivion. Futility finally relaxed the tension, and all hands moved to and fro along the bank, silently exchanging tragic glances.
After a whispered conference, the manager and the director took a car into the adjoining town to acquaint the police of the tragedy.
Divers were sent out. The afternoon faded into evening, and torches were lighted along the river. Fires were kindled, so that the dripping divers could warm themselves before taking to the water again. Chilled hands held cups of steaming coffee; and now and then, a ribald jest echoed in the darkness, as if the long hours of searching demanded a change of subject.
Early next morning Jim Warren’s body was found crushed against the prow of the ship, many feet below the surface of the water.
Morning newspapers proclaimed another casualty in the making of motion pictures for the entertainment of a pubic that demanded thrills which were not faked. The hum of activity at the studio slowed down perceptibly; and the company manager labored many hours over a letter to Jim Warren’s mother.
The next day, the director walked soberly through his battery of cameras and signaled an advance cue to his torch bearers, ready to ignite a building into flames for an exception stunt. Then he drew alongside the company business manager.
“This new stunt man seems nervous,” the director vouched, pointing to a man holding a rope on the roof of a tall building.
“All stunt men are as nervous as prima donnas,” the company manager said with an artificial laugh.