Charles Ray was a popular juvenile star in the 1910s and ’20s, but by the ’30s, his career was on the rocks, and he turned to writing. Here’s another in a series of offerings from his book, Hollywood Shorts, a collection of short stories set in Tinseltown.
*    *    *
Sound and Silence
“Don’t fight! Please, for my sake, don’t fight!”
The lovely Millie was screaming at two suitors scrambling about her expensively decorated apartment.
Harry Lane yelled, “I’ll rub you out, you rat!” and meant it.
Around and around the room they fought, slipping upon the loose rugs and well-polished parquetry. Hankard had insulted Millie, and Harry Lane demanded satisfaction.
A left, a right, an uppercut, and several fast jabs caused a hurried retreat; and in a few moments, Hankard found himself staggering on the blue tile of the bathroom. 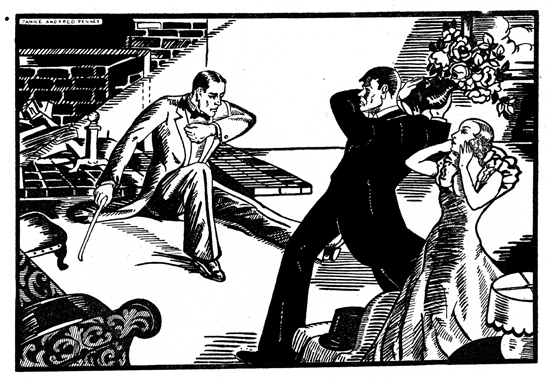 Crashing glass on the floor told the story of an overturned dressing table with all its feminine accessories.
“Oh, my perfume!” Millie screamed in protest. “My imported perfume. Oh, my Night in Paris! My Night! My Night!”
If, in the fifteenth century, a maiden had shouted the word night, however spelled, it might have been an urge to manhood. But there was no mistaking Millie’s meaning. She ran to the bathroom door to watch the precious liquid slushing across the tile under belligerent feet.
The word night may not have impressed Hankard’s mind, but Millie’s presence did, goading him on to victory. His powerful body punches sent his opponent backward into the living room. Through the tail of his eye, he sensed that Millie sympathized with him. That inspiration caused him to foul Harry, sending the man reeling into the fireplace.
Harry hurled a fire-iron. Dodging, Hankard retaliated with a vase. The vase was successfully ducked, but the water drenched Harry, and the roses made a ludicrous wreath about his neck.
Harry rushed in, as infuriated as a bull, intent on a quick finish. The impact of their bodies sent both inelegantly to the floor. On finding himself sitting on Hankard’s neck, Harry burst forth with a vocal noise unbecoming to any leading man, and rolled over on the floor to give vent to vociferous laughter.
“Cut!” the director cried. “Cut the scene! We’ll have to remake it. There’s no hope of keeping any part of that in the picture. Besides, I want a better scene—all through.”
The chief electrician yelled: “Kill ’em!”
Photographing lamps were extinguished; work lights burned pale in contrast. The assistant looked questioningly, which prompted the script girl to announce:
“Scene 183. Take 2 coming up.”
“Gimme a reload,” the cameraman grunted, and opened the box, awaiting film. Then he pressed a button.
The exterior red light was extinguished. Two shorts whistle blasts rang out, and the huge sliding doors were thrown open for the entrance of cool air.
“So it wasn’t real enough, eh?” Hankard asked sheepishly, while the prop man used a whiskbroom on his dress coat. 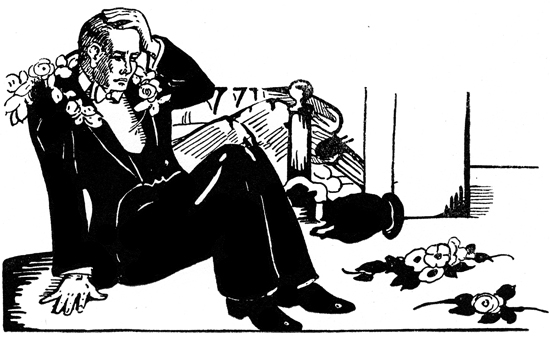 The director smiled, stretched himself, threw his manuscript onto his canvas chair, and sauntered toward the erring actors.
“Wrong!” he answered. “That’s the trouble. It was too real, including the flowers,” he kidded. “Now I suppose if I were in such a situation, I’d throw anything I could get my hands on. It’s rapid action that makes a fight look interesting on the screen, not reality. I told you to ad lib, but I didn’t tell you to throw roses at Harry and make him look like the Queen of the May.”
Goodnaturedly he pulled the flowers from Harry Lane’s neck and ordered him to change linen.
“Prop!” he shouted. “Get a new vase to break. Eliminate the roses, clean this mess up, and we’ll go again as soon as Harry changes his dress shirt and collar. Hey! Stand-by! Straighten the rugs, wipe the floor with your whatsit—I couldn’t say mop. I think the scene’s got me punch drunk.”
Smiling and wisecracking in order to cheer Millie, he rambled on foolishly.

“Yes, sir! our hero mustn’t be too gentle. Nature in the raw—that’s him. And without the danger line, or that tired feeling, pink toothbrush, or—hey! Somebody stop me before I break down.”
Everybody laughed to please the director.
The tension was broken. The electricians relaxed, the cameraman relaxed, the assistant relaxed, the script girl relaxed—all watching the mop as Props shoved it to and fro over the imitation hardwood floor.
Harry Lane went for a change. The script girl went for coffee. The assistant went for the script girl.
The tension was broken for everyone but Millie. Unable to relax, she felt her blood pressure running higher as lightning shot through her brain as to how to better her part of the scene.
Her first role. Not so large, but vitally important to her. She stood to lose terrifically if she did not achieve. The thought of probably being shoved back into the extra class loomed like a hideous nightmare, horribly humiliating.
How to do more? How to do more, she argued frantically. Why didn’t ideas flow to her as they did to other actors? Of course, experience was the answer, she thought hatefully. The lack of it in her case. She had been picked for her beauty. Was she beautiful but dumb? Perhaps she was. What could they all possibly be thinking concerning her? Those cursory glances from the director while talking privately to Hankard—what could they mean?
“My lord!” she mumbled. “My hands are perspiring. I feel dizzy. What a brain storm. I must try to appear calm.”
With a loud laugh, the director swung away from Hankard and sauntered toward Millie.
The thing to do is ask him how I might improve the scene. No, no, she quickly argued with herself. That would be dumb. I might say the wrong thing if I talk. Yes, silence is golden. What a quotation to remember. I’ll say nothing at all. Yes, that’s a firm decision: say nothing.
As his figure came closer and closer, the director loomed like a giant ready to devour. His dark glasses made him seem more hideous, making her heart go pitty-pat.
She’d just smile, that was all. Or perhaps, if she spoke at all, she’d say that she was nervously interested. She had heard an actress use that expression once. Yes, that—
“Now, what are you frightened about?” the director said in gentle tones. “What’s on your mind? Shall I answer for you?”
Taking a deep breath, Millie parted her lips in an artificial smile.
“Don’t be frightened. Everything you just did was just as I directed. When we retake the scene, repeat exactly. You know I chose you because you looked the part so perfectly.”
He think I’m dumb, Millie thought. The hurt in her heart sent resentful throbs throughout her body, making her ears ring. Then, through the director’s sentences, she interwove thoughts which cut as they rebounded.
“Now don’t try to act. He thinks I can’t. Just be natural; you look the part. Yes, beautiful but dumb. I know how to spot you. He’s just tolerating me. And I’ll send the others to lunch while we are working out the close-ups together. He’s disgusted. And they won’t be around to bother. How’s that now? Does that make you feel better?”
“Thank you,” she managed with effort. “Only—“
“Only what?”
Millie forgot her promise to herself. Forgot the quotation about how golden silence was.
“You’ve told me what to do up to the end of the fight,” she blurted out anxiously.
“That’s right.”
“Well, at the end, when Harry takes me in his arms, I’m certain that I know how to show that I like him, but how do I register the fact that Harry likes me?”
The director bit his lip a little.
“Don’t you think that you’d better let Harry attend to that?” he advised. With tongue in cheek, he left the stage to give vent to laughter, privately.
The wheeze was just too good to keep. By one o’clock the Masquers Club had heard it, and by evening the whole colony knew about the young thing who wanted to play both parts.
The director was something of a louse to tell it; but it didn’t matter. Before long Millie was a star and told the story freely on herself.