Charles Ray was a popular juvenile star in the 1910s and ’20s, but by the ’30s, his career was on the rocks, and he turned to writing. Here’s another in a series of offerings from his book, Hollywood Shorts, a collection of short stories set in Tinseltown.
*    *    *
Sans Tarte
“Abe, vot’s sans tarte.”
“Donno. Sounds it kinda dirty to me.”
“No, it don’t. It’s French.”
Abe and Ike Stein produced slapstick motion pictures back in the days when throwing pies was considered extremely funny. If a pie landed properly on an opponent, resembling a mud facial, it was considered a comical bull’s-eye. 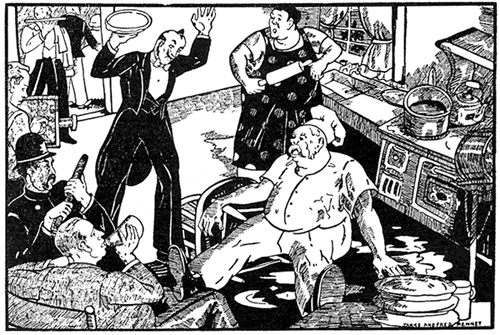 One day Abe ran into the office out of breath, with not a little profesional jealousy grueling him.
“C’mon, Ike,” he gasped, “let’s have it a conference. I got it. Now I know vot it means sans tarte. It’s dis Frenchman saying it about us. Vot yuh tink? Like a pel, a bosom friend, I’m eskin’ yuh are yuh sore?”
“Aw, sit down. Somebody’s been kiddin’ yuh!”
“Don’t get med already. Ve got tuh do somethin’. It’s business. Listen, dot crack’s hokay. Vait till yuh hear vot means it. Yuh know dis Frenchman vot’s come over from Europe—from Gaumont—to make comedies from Ideal Films, Inc.? Vel, he’s been sayin’ it about us and’ de hokum ve make.”
“You’re nutty. Our stuff’s hittin’ hokay. Enswering me dis vit straightforward figurin’?”
“And I’m enswering like a pel, a bosom, business pel. Look, dis Frenchman says he ain’t goin’ tuh make comedies like ours. He’s goin’ tuh make ’em sans tarte!“
“Abe, I’m gettin’ kinda dizzy hearin’ dot tart stuff. C’mon, let’s get goin’. let’s have a listen, vot means it? Look, am I busy, an’ yuh bring me riddles!”
“Ike, I am explainin’. Dot sans tarte means it without pies. He claims he’s goin’ tuh make comedies vithout pies. Ike, he can’t make comedies without pies!” After a few paces of the floor, he added: “Nobody ken!”
Weeks went by, and Abe entered the office with a dark countenance, quite financially disturbed. After pacing the floor in his usual panther manner, he lifted a bushy eyebrow in his partner’s direction.
“Ike, you know vot? Ve gotta get dis Frenchman. Grab ‘im vit a contract. If he makes pichers for us, he can add vot ve make to vot he makes, ad’ ve got de comedy field to ourselves, two vays from de middle, all sewed hop in de pocket!”
“Ve should vorry! Ve got it already. It’s in de basket vit clover. Ve are big frogs in de pond ve are frogs in.”
“Sure, but de pond could be bigger. Tings is makin’ progress mighty fast. Liddle by liddle tings go on improvin’, even in de picher business. Yuh know vot I mean?”
“Vel, suppose he does make better comedies den ve do. Vot about it? Vot difference does it make in a hundred years from ven he starts?”
“Sure, better comedies. Hah!”
“Who said he made better comedies den ve do?”
“Dot’s me too. Am I burnin’!”
“Vel, hokay den.”
“Now dot’s settled.”
“Can’t yuh effer come in de office vit sayin’ somethin’ vit construction? Listen, I’m busy an’ yuh gives me headaches. Ooo. am I busy, an’ dot’s always de time yuh bring riddles. Business is business! Don’t mix it hop vit slander.”
“I ain’t, Ike. It’s business tuh try an’ get de Frenchman hooked vit a contract.”
“Business, vel, vy didn’t yuh say dot in de foist place? I don’t mind stoppin’ my work if it’s for business, an’ not riddles or back-scratchin’.”
After much talk and many conferences, they got the Frenchman’s signature to a contract; but the clever foreigner wrote his own ticket. He was to have no interference whatsoever. No one allowed on his set while shooting, the document outlined. And no one was to see his picture until it was finally cut and edited.
Abe and Ike signed.
The first picture was made with the secrecy never before imagined. The set was enclosed, the story kept entirely masonic, the effects concealed, and the gags guarded like ammunition.
“An’ I hear he didn’t use no pies, Ike. Vot yuh tink?”
“I don’t tink,” Ike informed financially. “I jus’ vait.”
The picture was cut, and the showing arranged. Arrogantly the Frenchman entered the projection room with his staff, passing by Abe and Ike quite like a royal procession.
Like soldiers doing picket duty, Abe and Ike walked to and fro outside the projection room door, grunting at each other in solemn salute as they passed, thinking of their investment, with no possible chance of viewing the remains until sometime later when the Frenchman might condescend to acquiesce.
Minutes passed.
“Vel, vot yuh tink, Ike?” Abe groaned.
“I don’t tink. I jus’ vait.”
But Ike worried himself into perspiration. Then an inspiration came. Sneaking into the projection booth behind the operator, he viewed the remaining part of the picture through the cubby hole, unbeknown to the arrogant foreigner. When he could sense the closing scenes of the film, he slipped out to meet an anxious partner pacing in financial guard duty.
“Vot yuh tink, Ike? How’s de picher? Any good?”
Not desiring to be complimentary to the foreigner, Ike answered like a schoolboy: “Oh it’s hokay. Jus’ about like ours.”
Abe winced. “Gee, as bad as dot?” 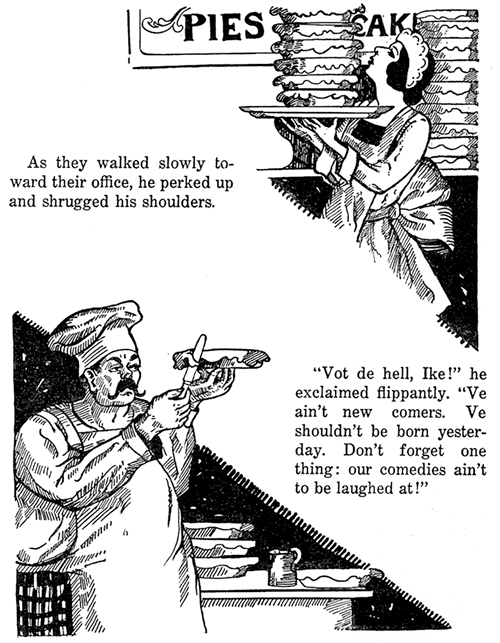