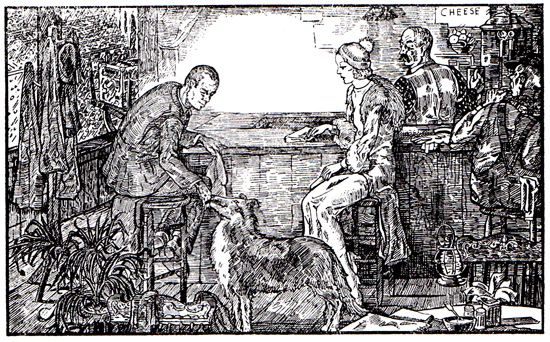 Silently they all communed together while watching the dawn of a new day chase the darkness from the snow-covered junction. When the local clanged in, they exchanged a toneless farewell, profuse with outward-bound gestures of courage.
*       *       *       *
A starved-looking author leaned across a shiny mahogany desk with eyes upon a motion-picture supervisor.
“What do you think of that for a story, Chief?” he asked nervously.
“Naw, no good!” the producer grumbled. “THere’s no scenario in it for my money. How can you make a picture with material that’s so heavy? There’s no comedy relief at all. You’ll break people’s hearts and the boxoffice at the same time with stuff like that.”
The author began, “Well—” gulped, and stuttered: “But that’s only one of my stories. I’ve been ill so long that I have written quite a number. Here’s one I think you’ll like because of its humor. If you have time, I’d like to read part of it. I’ll read quickly, then tell you the rest. I call it:
The Love Cure
Bill was fat and congenial, and Mamie was thin and calculating.
“I love you, Mamie,” Bill said religiously, each time he left her front steps.
Bill Splivin was a bond salesman. Mamie Conti worked extra in motion pictures. Ever since he could remember, Bill had had a yen to marry an actress. Thinking Mamie one had caused him to propose continually.
One night when he was leaving her front porch, Mamie said: “Okay, Bill, but I might as well tell you that I couldn’t possibly have the slightest interest in marrying a man who had anything to do with liquor.” 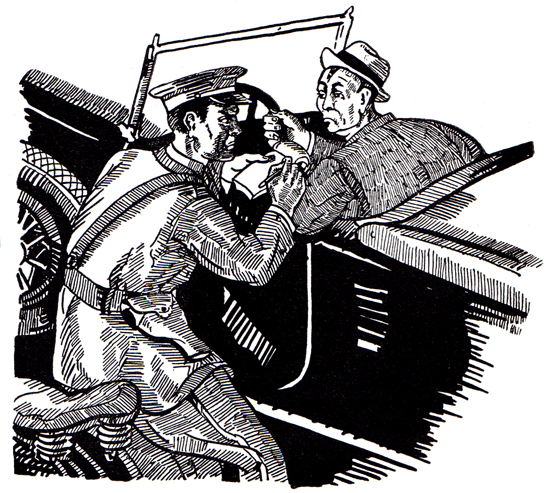 While edging down the stairs, Bill made a firm decision.
“I’ll quit drinkin’!” he blurted out, surprising her somewhat. “And that’s not all. I’ll change everything you’ve said you don’t like in me. I got a temper that’s vile, and I know it. I’ll change that, too. Yep, have a good house-cleanin’. Now, how’s that for a flock of resolutions?”
Flippantly Mamie returned: “You gotta show me!”
“I will! I’ll start from this very night. I won’t see you again until I’m cured of the liquor habit. It takes a week to do it, they tell me.”
With a firm conviction, he skipped lightheartedly to his car.
There was courage in Bill’s soul, tingling from head to foot. His foot happily played a game of tag with the motor accelerator. The car fairly soared down the boulevard. Resolution had infused new life into him.
Yes, he’d go right away, he reasoned, and get booked at that what-you-may-call-it place, where they cure alcohol addicts. Within a week he could return and win Mamie’s respect and hand. Meantime, he’d concentrate a lot on his temper, conquer everything, in fact, and spread that Christian spirit also. Why hadn’t he thought of doing it before?
The car sped faster and faster with each new decision.
The purr of a motorcycle alongside gave him goose pimples. “Pinched!” he grumbled through gritting teeth. It always gave him goose pimples to hear one of those slippery eels of a cop edging alongside, and to see him twist in front with his arrogant wave of authority. 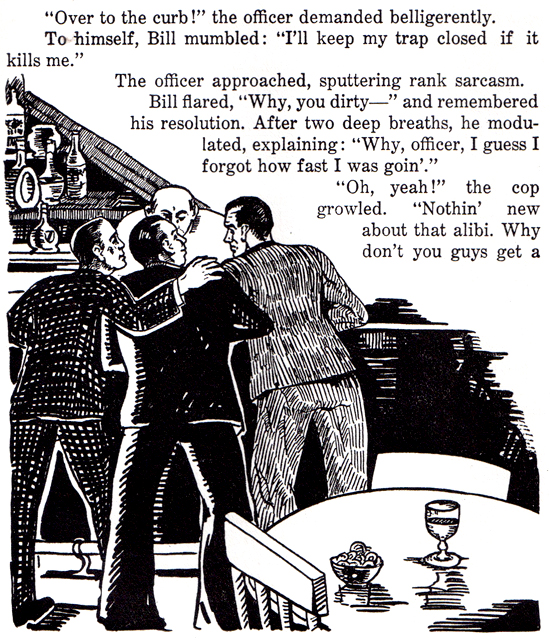 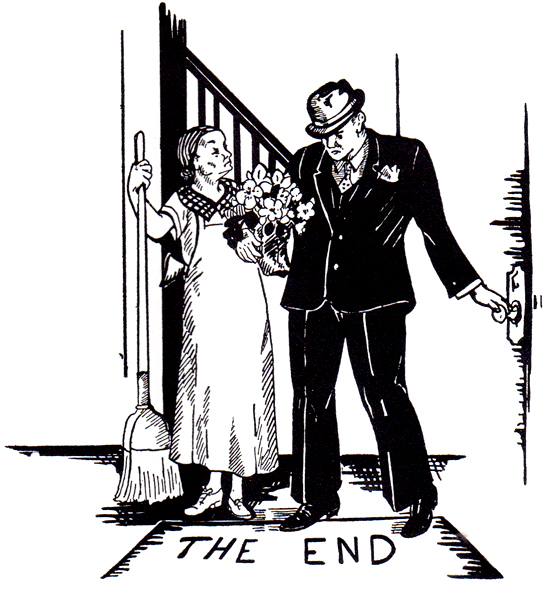 Quite confused, Bill descended the steps. He sat meditatively in his car for a few moments, trying to grasp the situation. He wasn’t really crazy about Mamie, he analyzed; then mumbled:
“What a dirty trick to play on a guy. I’ve lost my taste for liquor.”
*       *       *       *
Looking hopefully up from his manuscript, the author eyed the producer.
“Can you use a story like that, Chief?” he ventured with salesmanship in his tones.
“I have a vision,” the producer smacked his lips. “We’ll blend the two stories into one. Tie up an interest between this fella in your story entitled, The Cure, with the woman in your story entitled, Onward Bound. Don’t make him a bond salesman. He’s a vaudeville agent, see? The two guys that get drunk with him all night are comics, get it? Now this girl Mamie is jealous of all the women in the first story. We’ll mix a little kidnaping up into it, but not on the level, see? Mamie gets the kid away from the mother and hides it, to teach the ol’ man a good lesson. Then we don’t have the heavy story stickin’ out like a sore thumb. And we’ll call the new draft, Love Bound. Quite a vision?” he asked as he got stymied, and turned to his telautograph to demand a scenario conference immediately after lunch.
Thrilled and speechless, the author was engrossed in a vision of his own; but not about the picturization of his blended stories. He saw the vision of ham and eggs, for a long time to come.