Charles Ray was a popular juvenile star in the 1910s and ’20s, but by the ’30s, his career was on the rocks, and he turned to writing. Here’s another in a series of offerings from his book, Hollywood Shorts, a collection of short stories set in Tinseltown.
*    *    *
Murder at the Studio
Violent lightning flashes through the drawing-room windows reveal the snarled face of the maniac outside in the rain.
A figure is seen at a secret panel behind the fireplace, listening.
“Well, Chief, an actor has just pulled a fast one on us. Yes, this is Moriarity talkin’. Yes, I’m in the house now. Dugan is with me. Somethin’ has happened. So I thought I’d better give you a buz quick.”
“Okay, let’s have it.”
“Well, we came here as planned. Entered through the kitchen. There’s a housekeeper carin’ for the place. Nobody else on the premises. We tell her to keep shut. Then we ease into the drawin’ room and—“
“What’s the long detail for?”
“But I’m tellin’ yuh. Purty soon we hears a latch key at the front door and take positions on the back swing of it. When he closes the door, we surprise him plenty.”
“Let’s have it faster.”
“Yeah. So he says: ‘Guess the jig’s up,” or somethin’ like that. I agree, with my gat on him. He says that he’s been expectin’ it, but that it hasn’t turned out just like he imagined it was goin’ta. So I say, ‘Come on, let’s get goin’,’ and he says, ‘Wait till I get a coat.’ Then he starts upstairs. Dugan is quick to foller him.”
A man dressed like a chief passes a gun to the fiture at the secret panel by the fireplace and disappears. The shadowed figure with the gun closes the panel, then moves mysteriously into the drawing room behind the screen.
“But, Chief, I am explainin’ it fast. Half-way up the stairs the actor turns and says: ‘Listen, I surrender. Don’t like boy scouts. You both have your gats out. All I want is an overcoat. It’s rainin’ like hell, you know. Have a drink. You’ll find a decanter in the library.’ Well, we relax, Chief, but we don’t take no liquor. All at once we hear a shot comin’ from upstairs. Then we hear a body fall with a thud to the floor—“
The Chief laughs derisively.
“Yeah, I know we ought to be ashamed. If you could only see me now, you’d see how ashamed I look. So I thought if I came clean with the story, you wouldn’t laugh Dugan and me off the pay roll. It’s suicide, I tell yuh! We just heard a shot a second ago. Then I grab the ‘phone an’ waste no time in reportin’. No. No. Yes, I know we shoulda. I never thought to look upstairs. I’ll do it now an’ report again.”
*          *          *          *
Laying aside his manuscript notes, the author lit a cigarette and watched the smoke wind sinuously toward the ceiling on the even fog of the room. Then he drew his typewriter toward him and began to feel out the succeeding episode int he scenario continuity. Rapidly he wrote his inspirational twist:
The typewriter stopped suddenly, the author turned toward the hall door, and yelled:
“Come in.”
The office door opened three-quarters. Then a man, with tilted straw hat over his eyes and a cigarette pasted to his lower lip, stuck his head into the room, exclaiming:
“Hi Harry! What the hell, it’s 12:20. This funny studio still allows time out for lunch. Going to write on that silly mystery story of yours all day? What is it, a non-stop effort? Are you getting a bonus, or have you gone nuts?”
“No, d’jeat?”
“No, jew?”
“No, let’s!”
The author shoved his typewriter away, yawned, grabbed his hat, and shoved his confrere. As he moved languidly down the hall, he asked uninterestedly:
“What have they you on today—research?”
“Naw! We’ve just had a three-hour conference on how it was possible to do the Life of Du Barry and please the censors. I suggested doing Little Lord Fauntleroy.”
“What’s the matter, won’t they let you show the sewers of Paris any more?”
“Don’t pun, Harry! You won’t feel so chipper when they raise hell with you about all the crime you inject into those murder-mystery stories you write. What you struggling on now? How’s it coming? Have you got it all screwy and mixed up yet?” 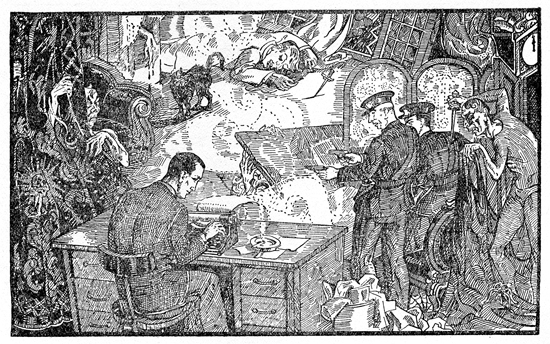 “I’ll say I have! I’ve got it so mixed up now that even I don’t know who committed the murder.”
“No kiddin’? What’s the big twist this time?”
“Oh, a swell twister. I have an actor running all through it, and they suspect him right from the start. They’re sure!”
“Yeah, well?”
“Well, don’t you get it? Great surprise! Never been done before. The one the audience suspects at the start really did the killing. Surprise enough? What do you think?”
“It’s a knockout, Harry!” his friend answered insincerely, and thought strongly of roast beef and gravy as they strolled out of the studio gate toward the beanery.
< Read "As Told at the Masquers Club" | Read “Screwy” >
If you enjoyed this post, please consider
supporting Cladrite Radio on Patreon