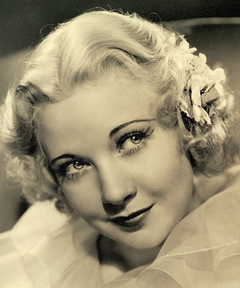 In Herman Raucher‘s coming-of-age novel Summer of ’42, his protagonist (coincidentally named … Hermie) has a big crush not on Lana Turner, Betty Grable, or Rita Hayworth, but on Penny Singleton, best known for portraying Blondie, wife to Arthur Lake‘s Dagwood in a long series of comedy B-pictures.

We have a similar little thing for Una Merkel, whose 110th birthday it is today. Una came to specialize in playing wise and loyal second bananas to the leading ladies in romantic comedies, but she was certainly not without her own charms, not the least of which was her Southern drawl (she was born and raised in Kentucky).

Ironically enough, it was Una who was first slated to play Blondie before the role was finally awarded to Singleton.

Una enjoyed a lengthy career that began on Broadway before she started working in pictures in the late silent era. Her final role was in 1968, opposite Bill Cosby and Robert Culp on the popular television program I Spy.

But our crush stems from her work in the 1930s, when she was the glamour girl’s best pal in movies such as Red-Headed Woman, 42nd Street, and Bombshell.

Here’s a scene from the latter picture, featuring our Una opposite Jean Harlow and Louise Beavers.