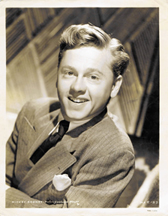 Today marks the 92nd birthday of Joe Yule Jr., whom most of us know better as Mickey Rooney. He made his stage debut at the age of 15 months and is still working today, which means his career spans ten decades. That’s an accomplishment that will likely never be matched.

We have a soft spot for the Andy Hardy movies he made for MGM, corny as they are, but we thought we’d mark Rooney’s birthday by sharing two less familiar clips from his career. The first is an appearance on What’s My Line, in which Mickey’s disguised voice is so annoying, we were praying that the blindfolded panel would quickly guess his identity.

The second clip is from the Mickey McGuire series of comedies from the late 1920s and early ’30s in which Rooney played McGuire himself.