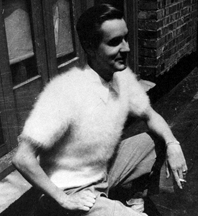 Today marks the 89th birthday of cult director Edward D. Wood Jr., a man who has been tagged by some as the worst director of all time. Bad he may be, though, he remains one of our favorite filmmakers, so he did something right.

If you’re not familiar with Wood’s oeuvre, you’ve got a lot of catching up to do, but most of his classic cinematic offerings are readily available on DVD, so we’ll leave you to track those down on your own. We wanted to share something less often seen, a television pilot from 1951 called “The Sun Was Setting” that was Wood’s first paid gig as a director (he wrote the script, too, which will be readily apparent to those who familiar with his work).

Happy birthday, Ed, wherever you may be.