Today marks the 112th anniversary of the birth of Cladrite Sweetheart Annette Hanshaw, so we thought we’d celebrate by revisiting this post, which originally appeared on January 14, 2010. 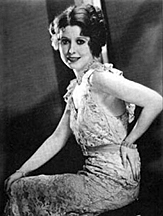 Though a rumored pair of mysterious demo records, cut many years after her retirement when Hanshaw was said to be considering a comeback, have never been released to the public, some “homemade” recordings Hanshaw did surface on YouTube.

The person who posted the recordings offered the following background:

For Hanshaw fans, these recordings, even lacking as they admittedly are in fidelity and clarity, are an unexpected and delightful gift. They make wish our Annette had mustered her courage and taken the plunge on that 1950s comeback. And for those who have somehow not been yet exposed to Hanshaw’s delightful stylings of the 1920s and ’30s, just keep listening to Cladrite Radio. You’ll quickly become very familiar with her work.