Bacall’s mother emigrated from Romania as a child; her father, whose forebears came from Poland, was born in New Jersey.

Bacall was born in the Bronx, but grew up in Brooklyn after family moved to a residence on that borough’s Ocean Parkway. Her parents were divorced when she was five, and her father disappeared from her life. She would later take her mother’s maiden name

A wealthy uncle paid for Bacall’s schooling at the Highland Manor Boarding School for Girls in Tarrytown, New York, and at Julia Richman High School in Manhattan. In 1941, Bacall studied at the American Academy of Dramatic Arts (Kirk Douglas was a classmate), working as a fashion model and ushering at the St. James Theatre to pay for her studies.

In 1942, Bacall made her Broadway debut in a small part in a play called Johnny 2 X 4. She was just 17 years old. That same year, she was crowned Miss Greenwich Village, which is where she was living with her mother at that time.

During this time, Bacall volunteered as a hostess at NYC’s Stage Door Canteen on Monday nights, when the theatres were dark.

In 1943, Bacall appeared on the cover of Harper’s Bazaar. Director Howard Hawks‘ wife, Slim, spotted Bacall on the cover and convinced her husband to test the young model for his upcoming film, To Have and Have Not. Hawks asked his secretary to find out more about Bacall, but the secretary misunderstood and instead sent Bacall a ticket to Hollywood. Upon meeting Bacall, Hawks signed her to a seven-year contract.

Lauren Bacall lived in the Dakota at 72nd and Central Park West, the same building where John Lennon resided with spouse Yoko Ono (who still lives there). Bacall once told an interviewer that she heard the shot that killed the former Beatle near the building’s entrance, but thought it was a vehicle backfiring.

Bacall was a two-time Tony award winner, in the category of Best Actress (Musical), in 1970 for her role as Margo Channing in Applause! and in 1981 for Woman of the Year.

Bacall was nominated for one Oscar, in the Best Actress in a Supporting Role for The Mirror Has Two Faces (1996) and she was awarded a honorary Oscar in 2010 in recognition of her place in the Golden Age of motion pictures. Bacall was the only Oscar winner to have been married to two other Oscar winners (Humphrey Bogart and Jason Robards).

Her autobiography, By Myself, was a 1980 National Book Award winner.

Happy birthday, Lauren Bacall, wherever you may be! 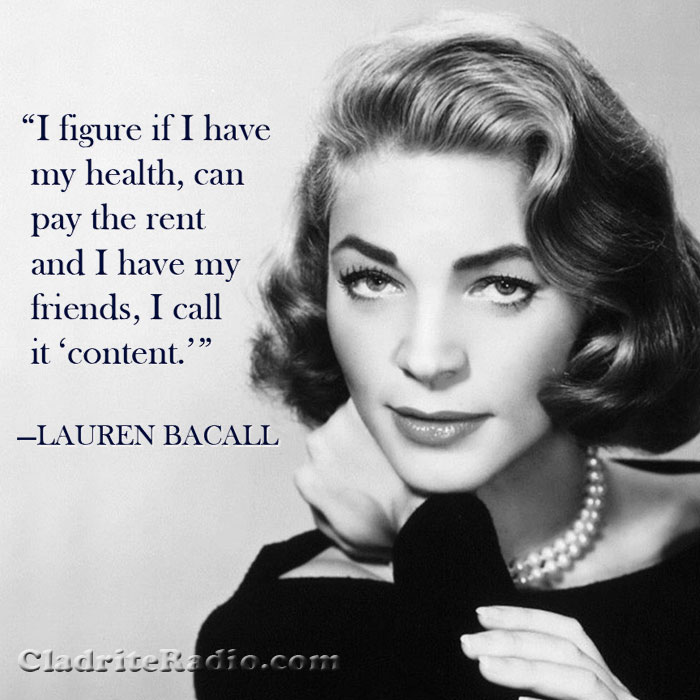