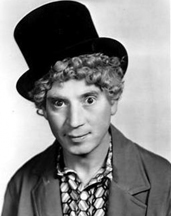 Today marks the 125th anniversary of the birth of the great Harpo Marx.

There’s the time that Harpo, after a run-in with the manager of a vaudeville theatre in the midwest, proclaimed, as the brothers departed the town via train, “Good-bye, Mr. Wells. Here’s hoping your lousy theatre burns down!”

That night, Mr. Wells’ theatre was indeed reduced to ashes.

Another tale we’ll let Harpo himself tell. What follows is an except from Harpo’s delightful 1961 memoir, Harpo Speaks!

One of the passionate hungers of my early life (I had many but none so fierce) was for black jelly beans. In the penny assortment they sold in those days there was never more than one of licorice, and eating one black jelly bean at a time only intensified my hunger. Penny assortments were few and far between, for me. Candy counters on the East Side were as thief-proof as bank vaults. Candy was one item I couldn’t hustle. No penny in hand, no merchandise.
I told myself I should always save such a delicacy as a black jelly bean for last, like dessert, but I never could. It was like being addicted to peanuts, cigarettes or the opium pipe. One was never enough. The first thing I would do when I got rich, I promised myself, would be to buy all the black jelly beans I could eat.
When I did start making good money, this boyhood hung had somehow become dormant. I forgot all about it. I forgot about it, that is, until one night about fifteen years ago.
My wife Susan and I were going to the movies with Gracie and George Burns in Beverly Hills. On the way to the theatre from the parking lot, we passed a candy shop, the ultra-modern kind that sells old-fashioned candies in glass apothecary jars. I stopped in my tracks. I broke into a cold sweat. I was having a seizure. My old hunger for black jelly beans had suddenly returned, after forty-five years. I excused myself and went into the shop.
I came out with thirty dollars’ worth. Susan and the Burnses gave me queer looks but made no comment. They waited to see what the gag was. How could I explain to them that this was no gag, but the satisfaction of a lifetime?
And what a satisfaction! Sweet, aromatic, chewy, delectable black jelly beans—a handful at a time, and always more where the last handful came from! I shall have to let my friend George finish the story because I fell asleep in the middle of my orgy.
I must warn you that George Burns is not above a little exaggeration now and then, but here’s how he tells it:

“So there’s Harpo, in the middle of the picture in a crowded theatre, fast asleep. He’s got a smile on his face like a happy drunk and on his lap a bag of jelly beans big as a peck of potatoes which he’s passed out already from eating only a couple of dozen of. Suddenly he twitches in his sleep. The bag splits. Thirty dollars’ worth of black jelly beans explodes—flying all over the joint. Do you know how many jelly beans you can buy for thirty dollars? My God, what a scene! The audience doesn’t know what’s happening, only that it’s some kind of disaster. People are yelling and clutching their children and putting up umbrellas. They stampede for the exits and skid on the jelly beans rolling down the aisles and fall into heaps like dead Indians. I tell you, it was worse than the Johnstown flood. finally they stop the picture and turn on the lights, and the manager gets the panic stopped while the ushers shovel up the debris.
“And Harpo? Harpo slept through it all. Fast asleep with the drunken smile on his face. When the movie is over, Susan wakes him up and when he sees his jelly beans are gone he turns on me and says he ought to slug me one for such a dirty, sneaky trick. Eating all his black jelly beans while he wasn’t looking!
“Then he softened up—it being impossible for Harpo to stay sore at anybody, even me—and he patted me on the shoulder. ‘That’s all right,’ he said. ‘I’ll forgive you, George—I had enough anyway.’
“I try to tell him what happened, but he won’t believe me, just keeps saying, ‘Forget it, George—I forgive you.’ To this day he thinks I ate up his whole damn bag of black jelly beans.”

I will only say that this part of the story is true: I ready had enough, for once in my life. I don’t care what happened to the rest of the thirty dollars’ worth. That’s one old hunger that will never bother me again.