Coming through for Clifton's ⋆ Cladrite Radio
Skip to content

Some years ago, we took a tour of downtown Los Angeles, offered by the Los Angeles Conservancy, that covered several blocks of Broadway and focused on the area’s classic bijous.

Downtown was once was the very hub of nightlife in the City of Angels, and though much of downtown has seen far better days, the more adventurous are still richly rewarded if they make their way down to this area. In recent years, there have been attempts to revive the area.

As our guide Lorraine, born and raised in LA and old enough to remember the heyday of the downtown district, reminded us, people had to travel a much shorter distance to reach downtown, and mass transit was in much wider use. “We never had a car,” she told us. “When we came downtown to shop or go to the movies, we took the electric street cars.”

Those are long gone, of course. 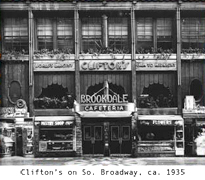 One thing that’s not long gone is the last Clifton’s Cafeteria. At one time, there were a few Clifton’s locations, but the originals were both downtown — one on Broadway, which is still there, and one on Olive.

Those two were both charmingly cheezy “theme” restaurants — the one on Olive had a Polynesian theme (oh, how we wish it were still there) and the one on Broadway, which opened in 1935, has a rustic “rural” theme meant to evoke redwoods country.

The founder of Clifton’s was a devout man who’d spent time in China with his missionary family. So moved was he by the deprivation he witnessed there that he resolved to address the issue of hunger throughout his life whenever he could.

And he did. This Clifton’s location had, for many years, a “pay what you can afford” policy, and yet they always turned a profit. They even opened a smaller branch nearby where the less fortunate could eat for just a few pennies.

Over the decades, as downturn has become less the hub of life in L.A., Clifton’s has grown a bit ragged around the edges, too. And recently, when we heard an entrepreneur had agreed to take over its operation (the Clifton family will continue to own the building), we’ll admit we felt a bit of despair. This surely wouldn’t turn out well, even though the new man in charge, Andrew Meieran, who has signed a forty-year lease, insisted he intended to preserve, not erase, the restaurant’s heritage and legacy. 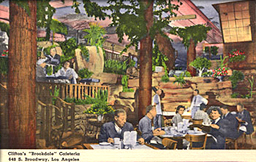 But we’re feeling more hopeful having read this story at the LA Conservancy’s web site. Meieran intends to, as the story reads, “restore historic features, keeping the unique redwood forest-themed interior intact. He plans to remove the aluminum grille covering the exterior and return the façade to its 1935 design. Ultimately, Meieran intends to have Clifton’s designated as a Los Angeles Historic-Cultural Monument.”

The story continues: “To enhance the building’s viability and fuel Broadway’s ongoing revitalization, Meieran plans to convert the second floor into a lounge and restaurant, as well as reactivate the commercial Clifton’s bakery on the top floor. 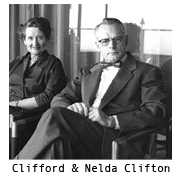 “His goal is to keep all sixty-five current employees while creating at least 100 new positions, including hiring graduates of the Midnight Mission’s restaurant training program.”

Well, hooray for that. Here’s a tip of the Cladrite fedora to you, Mr. Meieran. We’re thrilled to see you continuing the charitable efforts that have always been a key element of the Clifton’s legacy, and we’ll be first in line for some of that “refined” comfort food when next we’re out your way.

Clifton’s will remain open throughout its refurbishing and updating, so we encourage any members of the Cladrite Clan who live out that way or find themselves sojourning there to make a beeline to Clifton’s. Let’s show some support to someone who is trying to do the right thing by a treasured piece of Los Angeles’s heritage and history.

One thought on “Coming through for Clifton's”