Some folks visit flea markets, antique malls, and vintage stores with the primary goal of revisiting their youth; others seek to explore those years that preceded them, the decades they missed by being born too late.

We’re in the latter camp. The Sixties and Seventies hold little archeological interest for us. We were there (kids that we were). But take us further back, to the Fifties, yes, but preferably even further—the Forties, Thirties, and Twenties—and we’re in our element. And one of our favorite things to come across, as we sort through the flotsam and jetsam of decades gone by, are those esoteric items we never even knew existed.

Like this comb, for example, which we stumbled upon at the Garage, a weekend flea market on Manhattan’s west side. What caught our eye was the top of the comb, the tiers that give it a kind of Art Deco effect.

At first glance, we thought those tiers were merely decorative, but as the vendor who was offering the comb (and who was kind enough to allow us to shoot our blurry snapshot without making a purchase) pointed out, they’re actually functional. The dark areas aren’t painted, as we thought—they hold bobby pins.

How cool is that?

Well, not that cool, of course—it’s not as though it’s a product that changed anyone’s life. But given that we’d never seen a comb like it (have you? Tell the truth) and the fact that it was a promotional item for a business (we’re suckers for vintage promotional giveaways), we got a kick out of it, and so thought we’d share it with you, gentle readers.

There have always been oddballs (and lest anyone reading this take offense, rest assured we count ourselves among the oddest of balls) who have devoted their time and energy to amassing collections of esoteric items.

Prior to the ascent of the internet, these devoted few were limited to sharing their collections with the people whose lives intersected with their own—unless, that is, they resorted to mounting some sort of small museum in which to share their amassed “treasures” with the world at large.

In 1992, we devoted four months to a cross-country excursion, setting foot in all 48 contiguous states and traveling the entire length of the Mother Road, Route 66. Our focus the entire way was the sort of roadside attractions that then and now were ever-dwindling: mom-and-pop eateries, drive-in movie theatres, and the sort of tourist traps that we found irresistible then and still can’t pass up, among which we include these odd little “museums,” which are really more a testament to one man’s (or woman’s) particular obsession than the sort of scholarly, edifying institution to which we generally ascribe the tag “museum.”

For instance, on Day 2 of the aforementioned odyssey, we paid a visit to Mr. Ed’s Elephant Museum in Orrtanna, Pennsylvania (which is still going strong today, nearly twenty years later, we’re happy to report).

Mr. Ed (who is apparently not a talking horse, although we didn’t meet face-to-face) turned a life-long passion into a going proposition. He has, in addition to his collection of miniature elephants, which are housed in locked glass cases, a gift and candy shop, which also sells freshly roasted peanuts.

Most of us know someone who collects small plaster, ceramic and glass replicas of their favorite animals: frogs, giraffes, penguins, owls. If you have such a friend or acquaintance (or are yourself such a collector), you might consider following in Mr. Ed’s footsteps. Because, believe us, there was nothing educational about Mr. Ed’s Museum—he merely displays his collection of miniature elephants and makes his dough from the proceeds of the gift shop.

Nowadays, those unwilling to devote their perhaps meagre savings to opening a roadside “museum” can share their collections with the public at large on the internet, and while we don’t know the individual who gathered the labels for this extensive Flickr collection devoted to bread labels of the 1940s and ’50s, we’re willing to bet he or she has considered opening a small roadside museum at one time or another. 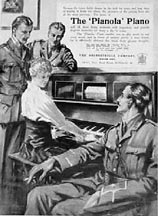 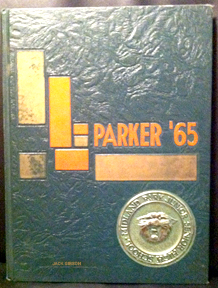 We’ve been thinking a bit of late about the scavenging through artifacts left behind from decades not long past that we do on a regular basis.

A few years ago (aw heck, we’ll come clean—it was 1997), we were wandering through a tiny flea market in our Manhattan neighborhood, just a few blocks from where we reside.

We were taken by a 1965 yearbook from Midland Park Junior/Senior High School in Midland Park, New Jersey. We kind of liked the design of the book, and we enjoyed, as we always do when browsing old yearbooks, taking in the faces and fashions of the students and faculty. The year 1965 was on that cusp between the bouffants and crew cuts of the Fifties and early Sixties and the coming Mod look of the late Sixties. Most of the pictures could just as easily have come from a 1959 yearbook, frankly, but there were a few signs of what was to come: In one candid shot, for example, a boy was dressed in rather psychedelic-era duds, with longish hair and a beret (though it seemed to have been a costume).

But mostly, we were intrigued by the mystery of whose yearbook it was. There were, throughout, inscriptions to someone named “Jack” [We’ve changed all the names in this account to preserve anonymity]. One full page one was filled with the sentiments of a young man bemoaning the fact that he and Jack had never gotten closer, though he expressed agreement with the way Jack had once assessed their relationship: They were too much alike, Jack felt, to ever be very close.

Despite that, Bob, the inscriber, praised Jack. “You, as the ‘Banger,’ really know how to make the wild scene, but always keep your sense of values within firm grasp.” Bob goes on to urge Jack to remember that, “[H]aving a good time means many things to many different people—never ridicule anyone who would rather sit home and read rather than go ‘upstate.'” Bob quickly dropped that stance, however, admitting that he had no place to lecture Jack.

Jack’s English teacher, Cathy Cartwright, an attractive young brunette in a black turtleneck sweater and with a B.A. from Paterson State College in Paterson, N.J., writes, “Jack—One of the few we shall never forget. It was quite an experience having you in class these two years. You made it worth it [emphasis Miss Cartwright’s]. Keep in touch tomorrows.”
END_OF_DOCUMENT_TOKEN_TO_BE_REPLACED

What we especially love about the internet is the micro nature of its esotericism, the specificity of its arcaneness.

Virtually no detail, no minute aspect, of life goes uncatalogued or uncelebrated.

And for those of us who are drawn to the past even as we savor the present, the fine-toothed comb that is the internet continuously turns up particular rich troves of unexpected treasures.

We have a great fondness for old radios, dating from the 1920s through the 1950s (we own a few of the clock-radio variety from the latter decade, and we hold them dear, but we fervently await the day that we own a truly beautiful—and, of course, fully functional— 1930s console or table radio, like the one depicted in the illustration in the banner at the top of this page).

But as much as we’ve pored over photos of these classic beauties online and gazed longingly at those restored examples we’ve occasionally come across in vintage emporiums, we’ve never taken particular note of the designs of their tuning dials.

Thank goodness Michael Feldt at indianaradios.com is more observant than we are. His very worthy site includes a collection of antique tuning dials that is breathtakingly lovely.

Who knew these dials could be so pleasing and evocative as stand-alone images? Well, Mr. Feldt did, for one.

Don’t you dare be satisfied with the few examples above. Mr. Feldt’s site boasts literally dozens, and they’re all worth a look.