Charles Ray was a popular juvenile star in the 1910s and ’20s, but by the ’30s, his career was on the rocks, and he turned to writing. Here’s another in a series of offerings from his book, Hollywood Shorts, a collection of short stories set in Tinseltown.
*    *    *
An Old Spanish Custom
“Hello. Central Casting?”
“Yes.”
“This is Ed Spencer at Beaux Arts Studios.”
“Yes, Mr. Spencer.”
“Have you any idea where we can get in touch with a character actor named Ramon Fernandez? What agent manages him? He’s pure Castilian. We want him to supervise. I understand he has also directed some very good shorts.”
“Call you right back, Mr. Spencer.”
“Thanks.”
The entire staff at the Beaux Arts Studios was very much perturbed over the filming of a Spanish version to a successful motion picture, and there were numerous reasons to warrant their anxiety. The predominant one was to insure pure Spanish speech, the last opus to reach Madrid having been laughed at on account of its diction, phraseology, and style.
In answer to their producer’s harsh criticism, the whole staff had “passed the buck,” scattering blame ruthlessly. But each had sworn, in his own heart, that if the Chief overlooked the malfeasance, he, as a committee of one, would never allow it to happen again.
“Hello. Central Casting calling Beaux Arts Studios.”
“Right.”
“We’ve located your Spanish supervisor.”
Mr. Ramon Fernandez was summoned, and after much questioning, was handed a contract which pleased him exceptionally. He was immediately given a beautifully equipped office, made very comfortable, and promptly forgotten.
Weeks passed.
Baffled and afraid of offending, Mr. Fernandez reported punctually at nine in the morning and never thought of leaving before five in the afternoon, during which time he daily tried to gain an audience with some executive.
“In conference,” the secretaries invariably informed him but assured him not to worry. “Everything is continually getting postponed here,” they consoled with simple understanding.
A little humiliated, Mr. Fernandez did his best to smile, accepted the faineancy, collected his checks regularly, bearing up quite well. The financial reimbursement seemed to quell his pride. Neat figures in his bank book were consoling.
Three days before his contract expired, he decided to demand an audience with someone—anyone. Many long hours he sat on a hard bench, watching three different doors for a possible chance to accost human authority.
The three days were spent in the same posture, on the same hard bench, reading the same magazines, absorbing nothing from their pages, feeling like an office statue.
Accepting his last check from the dumb cashier, he left the lot in wonderment, possessing a stronger belief in Santa Claus and a weaker belief in human nature.
Weeks went by.
Again Mr. Fernandez received a hurry call from the same studio. He was informed that a Spanish version of a motion picture was to be made. The purity of speech must be supervised. Did he speak Spanish?
Buckling his astonishment within, Mr. Fernandez said, “I do,” as meekly as a groom.
“An, then you are our protector,” this new executive complimented and drew a contract.
Mr. Fernandez occupied the same beautiful office, came and went as he had formerly done, and collected his checks promptly as before. Three days before the expiration of his contract, he read the same old magazines while waiting in the same position, watching the three important office doors, sitting on the hard bench like a statue.
In a mental fog, he approached the cadaverous cashier, accepted his last check, and sauntered out of the studio gate as wide-eyed as a released prisoner.
Weeks passed.
A hurry call to the Beaux Arts Studios caused Mr. Fernandez to speculate whether or not they were going to ask him to give part of the money back. Bravely he decided to be mute, and if necessary, allow them to sue. But when he heard the reason for the summons, he commenced to doubt his mental equilibrium. A sudden dizziness enveloped him. Was he fainting?
A powerful executive smiled but spoke sincerely, carefully, as if he would impart his secret to no one else.
“We are about to make a Spanish version of a motion picture,” he informed confidentially. “Now we are very, very particular in seeking someone who speaks the language purely. Do you—“
“Wait!” the Spaniard interrupted. 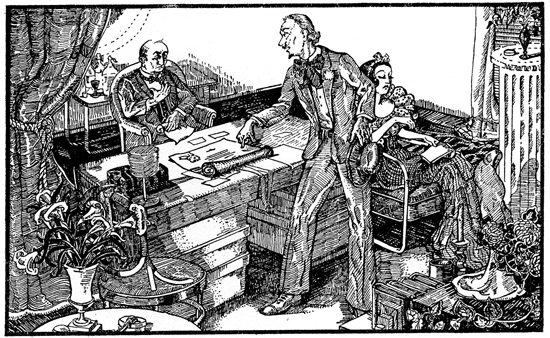 Rising to his full height, he moved forward, extracting his credentials. He spread the lesser ones about the edge of the desk, and like a map, unfolded his diploma from the University of Barcelona, signed by the king.
As if he could absorb fluently, the producer scrutinized the prized document, then lifted his eyes questioningly.
“All very good,” he said skeptically, “but do you speak Spanish?”