A meeting of the minds, ca. 1958 ⋆ Cladrite Radio
Skip to content 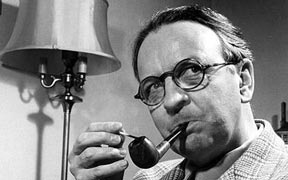 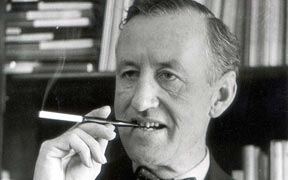 “I think that’s well put,” Fleming says with relish. “That is a far more sensible point of view than the one I put forward in my books, where people are shooting each other so much and so often, you often need a program to tell who’s in the act and who’s a spectator.”

Chandler responds by asking Fleming why he always includes a torture scene in his books, and Fleming traces the torture scenes back to the books he read in his youth—Fu Manchu and Bulldog Drummond are two series he cites.

“This so-called hero of mine, he had a good time,” says Fleming. “He beats the villain in the end and he gets the girl and he serves his government well. Well, in the process of that, he’s got to suffer something in return for all this success. I mean, what do you do—dock him something on his income tax?

“I get very tired of the fact that the hero in these other people’s thrillers gets a bang on the back of the head with a revolver butt, and he’s perfectly happy afterward. It’s just a bump on his head.”

This last might be read as a gentle tweak of Chandler, whose protagonist regularly receives such smackdowns, and Chandler recognizes the jab.

“Well, that’s one of my faults,” admit Chandler. “They recover too quickly. But I know what it is to be banged on the head with a revolver butt: The first thing you do is vomit.”

This information is greeted by a length pause, after which Fleming quietly mutters, “Well, there you are.”

Given that Fleming was briefly silenced by Chandler’s regurgatory observation, we’ll stop there, so as not to further spoil your enjoyment of this historic meeting of the literary minds, but we encourage you to pop over to the BBC Archives and give the interview a listen. It’s well worth twenty-five minutes of your time.