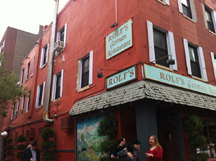 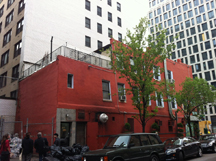 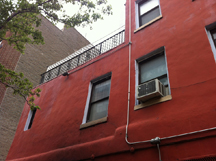 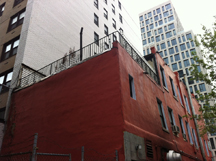 If you’ve read this far without previously having heard the legend of Groucho’s first audition, you are encouraged to read on; there’s more to the story than we shared above.

This account is from Hector Arce’s 1979 authorized bio, entitled Groucho. In the account below, he refers to Groucho as Julius, his birth name.

One summer day in 1905, [Groucho] came upon a notice in the classified section of the New York Morning World:

“When I saw the ad,” Groucho wrote in The Groucho Phile, “I ran all the way from our house on 93rd Street to 33rd Street … Then I ran up five flights of stairs and knocked on the door. A man answered. He was in a kimono and wearing lipstick. This was the profession I wanted to get into?”

Groucho won the job with his rendition of “Love Me and the World Is Mine.” An East Side tough named Johnny Morris was hired as the buck, or tap, dancer to round out the Leroy Trio.

Leroy opined that this would be a distinguished vaudeville tour. The act was slated open at the Ramona Amusement Parlor in Grand Rapids and then go on to play the New Novelty Theatre in Denver. No mention was made of any stops between.

“When I said goodbye, my mother cried a little,” Groucho wrote in Groucho and Me, “but the rest of the family seemed able to contain themselves without too much effort. As a parting gesture, just as I was leaving, the dog bit me.”

The troupe traveled by day coach to Grand Rapids. The show opened with four blacks dressed as Orientals, calling themselves the Wangdoodle Four. The Leroy Trio would be the second of five acts.

What Groucho would most remember about the tour was the mistreatment he received from Leroy and Morris. He’d saved his money, keeping it in a grouch bag, a chamois bag with a leather drawstring which most actors of the time carried. Leroy somehow convinced Julius that they should travel south, perhaps to Colorado Springs, in search of bookings. They arrived at Cripple Creek, 125 miles south of Denver and about fifty miles west of Colorado Springs, apparently off course, where he was left stranded. Leroy and Morris had absconded with his eight dollars.

Groucho’s concept of homosexuals was the prevalent one. Of course, Leroy bore some resemblance to a woman, and a couple of the Wangdoodle Four had jokingly threatened to use him as one. With Leroy there could be no doubt about sexual orientation. But Morris was tough and male and didn’t fit the stereotype. Julius was learning something new every day, as necessity required as he was to survive.

He was hired to drive a grocery wagon ten miles between Cripple Creek and Victor through a mountain range. At one point, the narrow road looked down on a gorge of four thousand feet, making for a terrifying ride.

“I didn’t know anything about horses except they ate sugar,” Groucho recalled. “The only horses I had seen up to that time were either on carousels or the broken down ones that pulled wagons on the streets of New York. Nevertheless, I introduced myself to the team and told them I was boss. I was scared. If I went faster it would be over sooner, I thought. However, one of the horses went on a sit-down strike in the middle of the road. He probably saved my life. The horse wouldn’t budge until a new driver came along. i was fired, of course.”

[His mother] Minnie wired him the money to come home.

As for Leroy and Morris, the paths of offbeat love may have run as roughly as more conventional ones. A Gene Leroy opened as a single at the Crystal Theater in Denver a month later.