Charles Ray was a popular juvenile star in the 1910s and ’20s, but by the ’30s, his career was on the rocks, and he turned to writing. Here’s another in a series of offerings from his book, Hollywood Shorts, a collection of short stories set in Tinseltown.
*    *    *
A Jump into Prominence
She lay dead in a deep gully in the Hollywood Hills. A tourist party had sighted her body from the road and notified the police.
Before the police arrived, newspaper and magazine photographers were taking snaps of her deformed body from every angle.
The official investigation revealed proof that the despondent girl had had a six-months motion-picture contract, but had never appeared in a single production. Yet black flaring newspaper headlines read: ACTRESS JUMPS TO DEATH.
A year before, there had been a beauty contest in a small town in Iowa. Nellie Bryan had won. She had boarded a train amid cheers, jests, and good-luck banalities from the hometowners.
The bridge-club boys and girls had tied a streamer on each side of the train coach. Large lettering circused her tour to the coast, proclaiming: CALIFORNIA, HERE COMES NELLIE BRYAN.
Many photographs were taken of the lovely girl, standing on the rear platform of the train with the mayor, the minister, and civic denizens. The photographs were spread artfully across the early edition of the Evening Eagle, which included a lengthy article, explaining the six-months contract that Nellie Bryan had won. Seventy-five dollars a week, with options ranging up to three hundred fifty.
On that eventful day, the train pulled out, with the town clowns running after it, whooping it up in

grand shape for Nellie. Sparing no expense, they had sent to the city for confetti. They used corn and rice to fill in with, and the moving train left a station platform resembling a winter snow. 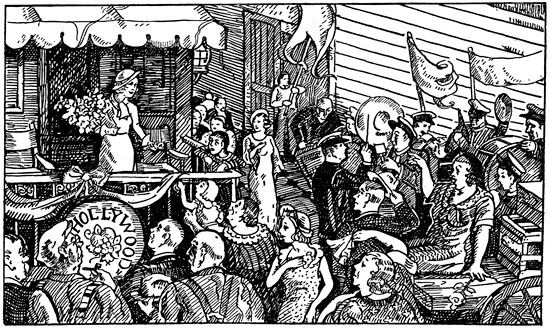 Long after the rest had departed, Nellie’s mother stood alone, with eyes toward the west. An inspiration forced her into the station where she wrote a short letter so that it would be picked up by the very next train to the Coast. In the excitement, she had forgotten to tell her daughter one or two things which were very important.
When Mrs. Bryan arrived home, she became aware that Nellie’s father had got tipsy on the left-over punch from the farewell party. Retiring to her room, she cried a little, then wrote part of another letter which would be sent west the following day. And every second day thereafter, a letter was dropped into the box, bearing Nellie’s Hollywood address.
Hollywood was fun—at first. Nellie saved a great deal of her weekly salary, too, and finally did the noble thing of aiding, with a good-sized loan, a feminine friend in dire need.
The money rolled in regularly, but Nellie was mentally disturbed. She was never cast in any production, not even in a small, unimportant part. Kind executives continually explained that nothing of importance had been written in which she could be used.
However, the publicity department was active. They had her photographed in gorgeous costumes, in furs, exotic gowns, and frocks of every description, with trunks, handbags, novelties, and divers advertising. And invariably there would be the full description of the contest she had won. Her beauty became famous. Her name was often split in print. Nellie (Exotic) Bryan, they called her.
Six months passed quickly. As she had never been seen on the screen, the options attached to her contract so securely when she signed them were ignored. In a mental fog, Nellie left the studio with little money and a sting in her heart.
Weeks passed. Months passed. She never did get work.
Desperately seeking the friend to whom she had made the generous loan, she finally secured a possible address in New York City.
After two letters had been returned, she spent days in trying to obtain the right address of her friend. Finally she succeeded, but not until her funds had diminished to nothing at all, leaving her with an aching stomach that vibrated with frightening pains.
A note left in her hotel room explained that she would not return, knowing she was to be locked out. The note proved that she had never informed her parents or friends back in Iowa of her plight. “Stay away from Hollywood,” was her terse statement of advice. The note ended with expressions of great disgust for human nature, particularly for a friend who was no friend in need.
But she was wrong. The day after she jumped from the cliff, the hotel clerk handed the chief of police a letter addressed to Nellie. The friend in New York City had sent her a postoffice money order for several hundred dollars.