Jimmy Starr began his career in Hollywood in the 1920s, writing the intertitles for silent shorts for producers such as Mack Sennett, the Christie Film Company, and Educational Films Corporation, among others. He also toiled as a gossip and film columnist for the Los Angeles Record in the 1920s and from 1930-1962 for the L.A. Herald-Express.
Starr was also a published author. In the 1940s, he penned a trio of mystery novels, the best known of which, The Corpse Came C.O.D., was made into a movie.
In 1926, Starr authored 365 Nights in Hollywood, a collection of short stories about Hollywood. It was published in a limited edition of 1000, each one signed and numbered by the author, by the David Graham Fischer Corporation, which seems to have been a very small (possibly even a vanity) press.
Here’s Part 2 of “The Twenty-Foot Kiss,” a not-so-short story from that 1926 collection. (Here’s Part 1, if you missed it.) 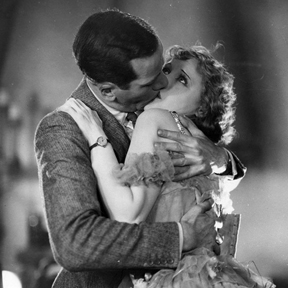 Paul, who was quite white with emotion, then told Kahn how he and Thomas Smythe had been going to dinner together each night and how he had always called for him after work. Then he related having seen the hurried departure of Jewel Joseham, and of coming immediately afterward to Smythe’s dressing room to find him already dead.
At the end of this recital Adolph Kahn nodded his head, thoughtfully. He, too, was considering the situation that had existed between the two well-known actors. Then they closed the door and went back to Kahn’s office.
There Kahn chewed savagely on a fat cigar, while he telephoned to the police and made arrangements for dealing quietly for the present with this extraordinary circumstance.
While they waited for the police ambulance, they remained silent—thinking. Adolph Kahn nervously paced the heavily carpeted floor. Neither of them spoke. They strain was almost tangible.
At last the detectives and a deputy coroner arrived. They made their official notes as to the position of the body, while Paul watched them closely; it seemed but a matter of duty with them, and they worked swiftly, efficiently, thoroughly over the red tape they considered necessary.
Finally the deputy coroner released the body and it was placed in the police ambulance to be taken to whatever morgue the coroner saw fit to assign.
The three officers questioned Kahn and Paul. Both gave what information they could. Paul did most of the talking. Adolph Kahn was so excited by now that his words were an unintelligible jumble.
The detectives stated on departing that the body would be examined at once and that Kahn and Paul had better call at the police station in the morning before going to work. To this, both agreed.
Paul rushed at once over to Vergie’s home and trusted her with the news.
“Oh, Paul, how terrible!” Vergie explained on hearing the details. “It doesn’t seem possible.”
Paul shook his head.
“I wonder if Jewel would really dare such a thing?”
“I don’t know, but it does look like it, in a way,” Paul answered, earnestly.
“What do you mean?” excitedly from the girl.
“Well, I couldn’t find any marks of violence on him. He wasn’t shot, or stabbed, I’m sure. There was no blood and nothing seemed to be disturbed, as if there had been a struggle. As I said before, it looks a lot like heart failure.”
“Yes, but you said—“
“Yeh, I know. I’ve never heard him complain of a sick day. He was an excellent swimmer, didn’t smoke much, and spent a lot of time in the open. No, I don’t think it was heart failure.”
Vergie shuddered.
“All right, we won’t talk about it any more. I’ll run up and get something to eat and then I’m going to try to figure this thing out, unless you want to go to a show or up to the Little Club.”
“I don’t know, Paul. Let’s walk up to the Boulevard. Where does Jewel eat?”
“Usually at the Blue Plate, but I don’t think you’ll find her up there tonight.”
“Let’s go see, anyway,” she urged. “It’s a nice warm evening and the walk will do us good.”
“Sure, anything you say.”