Here’s some remarkable and moving color footage of the celebration of VJ Day—August 14, 1945—in Honolulu (where they certainly had every reason to celebrate, and with gusto, the victory over Japan). The footage is credited to one Richard Sullivan, who shot the footage along Kalakua Avenue in Waikiki. 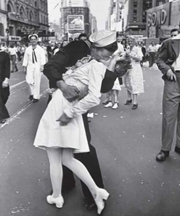