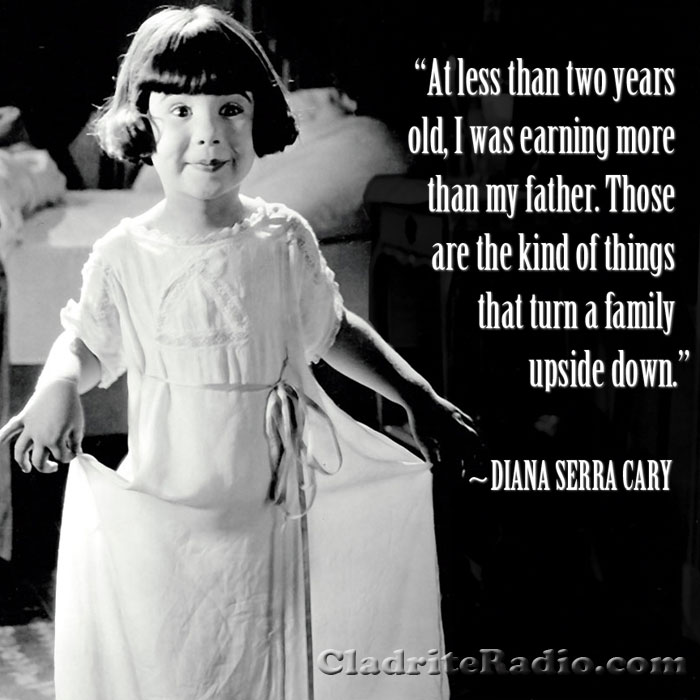 Charles Ray was a popular juvenile star in the 1910s and ’20s, but by the ’30s, his career was on the rocks, and he turned to writing. Here’s another in a series of offerings from his book, Hollywood Shorts, a collection of short stories set in Tinseltown.
*    *    *
Windows
Windows, windows, nothing but windows up and down the narrow hotel court. He had sat counting them many times lately, during the long hours of waiting for a telephone call from Central Casting Office.
But the waiting was all over now. Thoughts of a possible career had faded. He would have to seek employment at anything he could find. This was the end.
Momentarily his eyes rested on the lighted window straight across the court—her window. He had never met the occupant of that apartment, but had often gazed into the windows from the dark recesses of his own room. Not a nice thing to do; yet his actions were not those of a peeping Tom. They were more like a Romeo, with Romeo’s mood and lines:
Just now, as he saw his dream girl move into view to answer her telephone. “Tomorrow,” he read easily on her lips, and from her expansive frown, realized that the single word did not satisfy the party on the other end of the wire.
Quite distraught, she started pacing the floor, twisting her handkerchief, seeming ready to burst into tears.
He could not summon any pity for her. His own troubles surmounted any that another human could possibly have. No one could be placed in the same miserable, deplorable condition as he.
The girl’s pacing and turning afforded clear scrutiny of her beauty. Jet-black hair fell in fluffy waves over a well-chiseled brow, crowning a lovely face with glory. He sensed long lashes, veiling eyes that he felt sure were golden brown. Too thin a figure, he criticized unconsciously.
Stopping abruptly in her pacing, the girl lifted her head haughtily and said: “Come in.”
The door swung open, revealing the clerk. He carried a bunch of keys, and ordered the emotional girl into the hall.
The eviction made the boy’s blood run cold. Grabbing several envelopes, he rushed out to the mail chute, and stood as if occupied, to listen.
“But had I only known,” he heard his dream girl plead.
“You can’t tell me that the manager hasn’t warned you many times,” the clerk insisted, demanding her key. “Six o’clock tonight was the limit of his endurance, he told me to inform you. I do hope you will understand that this duty is painful to me,” he concluded, bolted the door, and left the evicted girl crying against the wall like a child locked in a closet.
Edging very close, the sympathetic boy stammered: “May I—could I be of any assistance?”
She looked up through moist eyes which he saw were hazel.

END_OF_DOCUMENT_TOKEN_TO_BE_REPLACED

Charles Ray was a popular juvenile star in the 1910s and ’20s, but by the ’30s, his career was on the rocks, and he turned to writing. Here’s another in a series of offerings from his book, Hollywood Shorts, a collection of short stories set in Tinseltown.
*    *    *
It Stinks
“It stinks!”
“It does not stink! I guess I know when a thing stinks!”
A motion-picture scenario conference was in session.
Horatio Van Elf was responsible for the first outburst. Of course, if any of the Van Elfs had heard it, they certainly would have been horrified at such ribaldry. His Bostonian mother would have been shocked, had she heard the expression at any time since his birth, at which moment, she had given him the noble name of Horatio. But as he was now in his forty-fourth year, wizened and sarcastic, it was a long stretch back to the moment of his christening. Nor had his mother ever dreamed that Horatio would serve as gag man in the scenario department of a motion-picture studio.
Seven members sat about a long conference table. Five of them were watching Horatio and Edgar glare at each other, eagerly hoping that the outburst would develop into a long argument which might ease the mental effort from the toil of story writing.

“What a crabby killjoy you are, Horatio.” Edgar spat at the cuspidor disgustedly. “Always puncturing anybody’s idea-bubble, with that lousy pet line of yours, before it gets the slightest chance for life. Order!” he yelled.
Edgar Savage was the scenario chief and could yell back at anyone. Plus his position, he was proud of several brain children in the form of what he called original stories, which were declared boxoffice successes.
“Furthermore,” Edgar continued with some dignity, “that pet line used to be funny when you first pulled it. Now it’s shopworn. Get somethin’ new.” After snapping his black eyes around the table, he concluded commandingly: “Now let’s have quiet an’ get going. Am I right, boys?”
“Right as hell, Edgar!” Ham Edwards exclaimed through uneven gold. “Somebody’s goin’ tuh give Horatio a permanent wave sometime for that crack of his.”
Ham Edwards was a short, squint-eyed, canny individual who always wore a tattered straw hat when in conference—for luck, he declared. But in reality it afforded him an opportunity to lean back in his comfortable chair with the luck hat over his eyes, and while assuming the attitude of thinking, to snatch a nap of forty winks many times during the long afternoons. He was second in command; was also a successful writer, even if his stuff was drivel. The name Ham had stayed with him since his acting days, when he had been much younger and less rotund.
“Now listen, an’ get it, Horatio!” Jay chimed in, a thin, red-haired man of forty-two—a lesser light, fearful of his job. “We 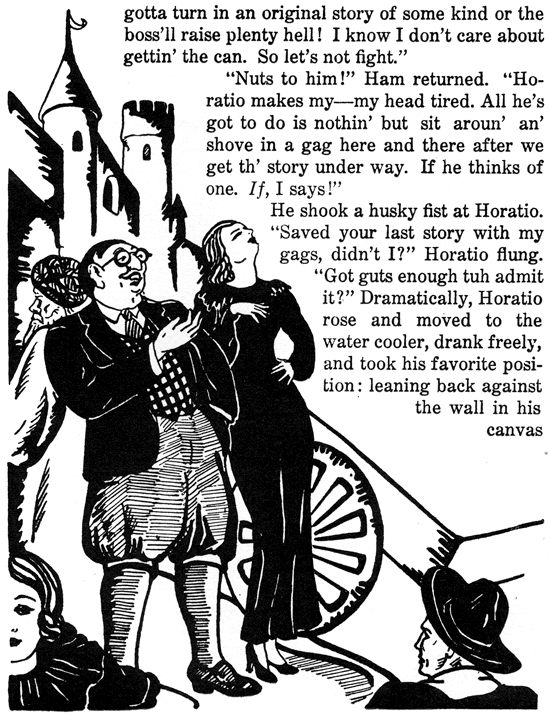 chair, with one foot dangling against the water-cooler drain bucket.
“Now all of you pipe down!” Edgar demanded. “Whatcha think this is, an arena? We just gotta turn in a Special, the boss wants to call it. We’ll be lucky if we get even a lousy idea before night, the way you’re actin’. Furthermore, the boss’ll break up this staff, surer ‘n hell he will, if we don’t have somethin’ to offer. Most any minute he’ll be askin’ for an outline. Now everybody get quiet while I think!”
Horatio just had to say: “What with?”
Edgar’s eyes snapped fire. His hands drummed an exasperating tattoo on the table.
“No more cracks, Horatio, or so help me, I’ll go stool pigeon an’ inform the boss.” Thinking better of his remark on exposé, Edgar temporized, “About your sneakin’ out on us whenever that blonde stenographer passes our door to go nose powderin’. Now quiet! Everybody think!”
Violent silence ensued.

END_OF_DOCUMENT_TOKEN_TO_BE_REPLACED

Many years ago, we attended a “Hollywood: Legend and Reality,” an exhibition of movie memorabilia from the Golden Age of Hollywood at the Cooper-Hewitt National Design Museum. The exhibition included such offerings as an eight-inch gorilla figure used in the filming of the original King Kong, the golden calf from Cecil B. DeMille‘s The Ten Commandments, Rudolph Valentino‘s matador costume from Blood and Sand (1922), Tom Mix‘s 10-gallon hat, and best of all, for our money, Sam’s piano from Casablanca. We wanted so badly to reach out and tinkle those tiny keys (the piano’s a miniature, with something fewer than 88 keys, sized so that it might be easily pushed from table to table in a nightclub, as Dooley Wilson does in Rick’s Cafe.

Looking back, we’re now left wondering if a number of the artifacts in that exhibition weren’t loaned by Debbie Reynolds. Reynolds long held out hope that her extensive (to put it mildly) collection of Hollywood memorabilia would one day be housed in a museum, but with no funding forthcoming, she’s now auctioning much of it off. The sale is to be held on June 18.

“My lifetime dream has been to assemble and preserve the history of the Hollywood film industry. Hollywood has been an enormous part of my life as I know it has been for countless fans all over the world. This collection represents a lifetime of collecting Hollywood artifacts and this is a rare opportunity to own a piece of Hollywood History for those who love the movies as much as I do. For the first time in nearly five decades, these iconic pieces will be made available to the public through a series of auctions presented by Profiles in History beginning in June 2011.”—Debbie Reynolds

It’s hard to name a star who’s not represented in Reynolds’ collection. Humphrey Bogart? A brown sport coat he wore in Knock on Any Door (1948) is up for auction. Harpo Marx? One of his familiar top hats with attached blonde wig is included (it was a gift from Harpo to Reynolds many years ago). Judy Garland? There are no fewer than seven items associated with her up for sale, including the blue dress she wore playing Dorothy Gale in The Wizard of Oz.

We could go on and on. It’s a very impressive collection, and frankly, it’s heartbreaking that these amazing pieces will now go into the hands of private collectors, quite possibly never again to be enjoyed by the general public. It’s a crying shame that the collection couldn’t have been kept together and placed on permanent exhibition somewhere, anywhere.

The official website for the auction has much more information (if you’re in the Los Angeles area, you should make it a point to attend the public previews that precede the sale; who knows when you’ll again have the opportunity to see these treasures?). There’s also a bound catalogue for sale on the website for $39.50, but for those of us for whom even that is a bit more than we’re comfortable spending, there’s a PDF catalogue for the downloading, too.