Warm up your DVRs! Turner Classic Movies is showing four hours of “The March of Time” on Sunday, starting at 8 p.m. ET. 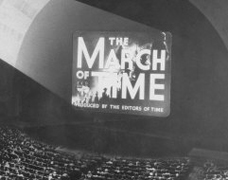 At its peak, The March of Time provided news on current events for over 20 million people per month in 9,000 theaters throughout the United States. Lasting from 1935 through 1951, the series experienced the most sustained success of any documentary-like programming before the age of television, and it was recognized with a special Academy Award in 1936 for “having revolutionized one of the most important branches of the industry—the newsreel.” Its format and approach to depicting news events became a major influence on news documentaries and public affairs programming.

Time-Life-Fortune, Inc., which was headed by Henry Luce, sponsored The March of Time under the watchful eye of Roy Larsen, but it was Louis de Rochemont who innovated the techniques and structure that defined the series. De Rochemont, who had a lifelong passion for true-life dramas, was the director of short films for Fox Movietone News when he brought the idea for what he termed “pictorial journalism” to Larsen. He based his proposal on a radio version of The March of Time, which he felt could be re-created on film. Larsen and de Rochemont began work in June 1934, and the first episode debuted at the Capitol Theatre in New York City on February 1, 1935.

The March of Time modernized and updated the newsreel, which had declined in craftsmanship and popularity after the coming of sound. Companies that made newsreels usually did so as a sideline, meaning they invested little money, effort, or personnel into their productions. They did not staff actual journalists to write scripts or to organize the footage, because they were looking to turn the most profit with the least amount of money. Newsreels were sold as part of a package deal to studios or distributors, and they consisted of film snippets of disasters, sporting events, beauty contests, or crazy fads. Producers stayed away from world events, especially those that generated controversy. In contrast, Larsen and de Rochemont wanted to produce a new film each month that dealt with the type of contemporary events and issues found in the pages of Time or Life magazine. Their approach was to turn a topical event or issue into a story with a beginning, middle, and end so that it could be easily understood to all audiences. Each episode cost between $25,000 and $75,000 in an era when the average newsreel was produced for $8,000 to $12,000.

The goal for The March of Time was to present an event or situation so effectively that viewers felt like they were experiencing the real thing. To accomplish that goal, de Rochemont combined archival footage, re-enactments, interviews, and dramatic voice-over by the deep-throated Westbrook Van Voorhis. He became so associated with the series that he was billed as the Voice of Time–and occasionally mocked as the Voice of God or Voice of Doom. His voice of authority was particularly memorable at the conclusion of each episode when he emphatically pronounced, “Time marches on!” … Read more

Here is the schedule of March of Time episodes to be aired on TCM on Sunday, September 5th, on TCM: