Here are 10 things you should know about Jean Parker, born 106 years ago today. She didn’t become as big a star as some expected, but she enjoyed a very successful 30-career on stage, in films and in radio and TV. 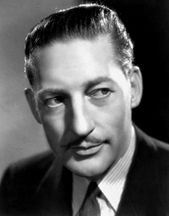 Though he may not be well remembered by your average Jill or Joe, for movie buffs, Warren William is an icon of 1930s Hollywood—especially the pre-code years.

Though he played a few good guys, William’s typical character ranged from roué to to cad. He is, for fans of 1930s cinema, the man we love to hate. As Roger Fristoe wrote for tcm.com, “William played his fast-talking, opportunistic characters with such style and dash that Depression-era audiences often found themselves rooting for him.”

William was a creature of the city, more urbane sophisticate than rough-and-tumble he-man. One can easily picture, say, Clark Gable or Gary Cooper feeling quite at home in the great outdoors, but somehow not William. And yet, William remained trim and fit until the end. He was broad-shouldered and had a narrow waist, and one would assume, because he appeared so fit, that he was athletic and active, in the gym if not on various fields of play.

But how, then, to explain the way he ran? (His daffy dash begins at the 30-second mark in the video below.) Mind you, we’re in no position to mock anyone else’s athletic abilities (it’s usually we who are being mocked), but we’ll admit that William’s sidewinding caper (as seen here in The Lone Wolf Spy Hunt) made us giggle.