Here are 10 things you should know about Claire Dodd, born 109 years ago today. Her career was brief, but she made her mark in Hollywood as one of the loveliest actresses of the 1930s. 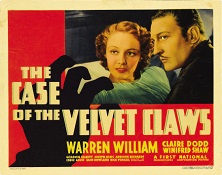 We’re about halfway through our first — and, as it happens, the very first — Perry Mason novel, The Case of the Velvet Claws, published in 1933.

Having read none of the later installments in the series, we have no idea what direction Erle Stanley Gardner took the series — and the characters — in, but in reading this first book, we can say that Warren William, who played Mason in a run of 1930s motion pictures, is much better suited to the role of Mason than Raymond Burr was.

It’s entirely possible that the character of Mason, as Gardner depicted him, changed over the years, but William is perfect for the brash, supremely confident rogue depicted in this first novel, which has more of a hard-boiled quality than we suspect the later novels in the series exhibited.