Here are 10 things you should know about Lee Tracy, born 123 years ago today. Show us Tracy’s name in a movie’s credits, and we’re on board, no questions asked.

Melvyn Douglas, born Melvyn Edouard Hesselberg 115 years ago today in Macon, Georgia, was the product of an unlikely marital pairing: His father was a Latvian Jewish immigrant, a concert pianist who taught music in university conservatories, and his mother was from Tennessee (with English ancestry that extended back to the Mayflower). Douglas’s father never mentioned he was Jewish and his mother referred to him in her son’s presence as simply as “foreign.” So Douglas didn’t know of his Jewish heritage until he was 18 years old, when his aunt Cora clued him in.

Douglas dropped out of high school to pursue a career in theatre, and he found success on Broadway (in 1928, he played the same role, a gangster, in the drama A Free Soul that Clark Gable would play in the 1931 movie adaptation opposite Norma Shearer). In 1932, Douglas answered Hollywood’s call and though his ensuing screen career was a successful one, it would be some years before he found satisfaction in motion pictures.

“The Hollywood roles I did were boring,” said Douglas, perhaps best remembered today as the man who made Greta Garbo laugh in Ernst Lubitsch‘s classic comedy, Ninotchka. “I was soon fed up with them. It’s true they gave me a world-wide reputation I could trade on, but they also typed me as a one-dimensional, non-serious actor.” 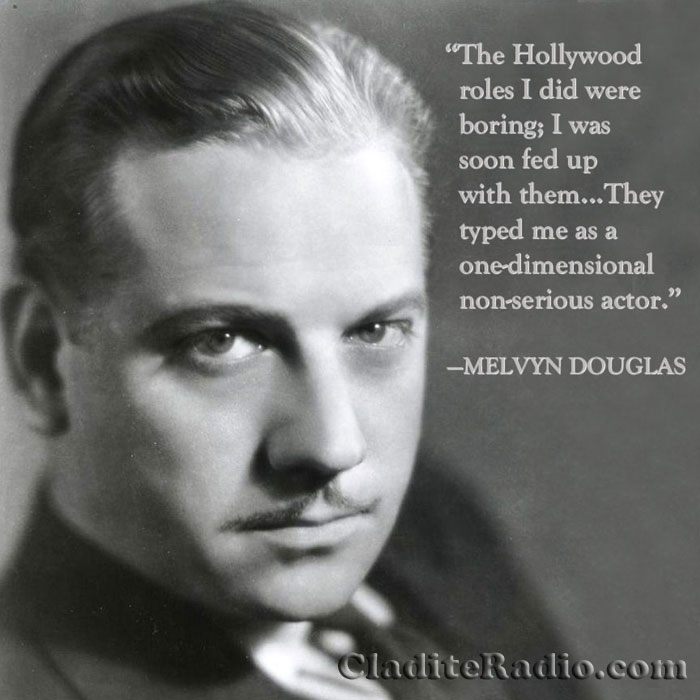 In the early ’60s, his leading man days behind him (and the iron grip of the studio system loosened), Melvyn Douglas began to find work as a character actor, and it was only then that he had the free reign he sought in choosing roles. “I do a picture only because I want to do it, for my own reasons,” he said at the time. “If it’s a lemon, at least I picked it.”

Douglas achieved the rare triple threat for an actor: He won an Oscar (two, actually, for Best Supporting Actor, in Hud [1963] and Being There [1979], an Emmy (Best Actor-Drama for a 1967 CBS Playhouse production entitled Do Not Go Gentle into That Good Night) and a Tony (Best Actor-Play, The Best Man [1960]). Douglas died in 1981 at the age of 80.

Happy birthday, Mr. Douglas, wherever you may be! We quite liked your work in those pictures of the 1930s and ’40s, but we’re glad you got to expand your range a bit before you were through.