Here are 10 things you should know about actress Theresa Harris, born 112 (some sources say 109) years ago today. Harris could sing, dance and act and was obviously beautiful, but was extremely restricted in the roles she was allowed to play. The loss was ours every bit as much as hers.

The lovely Sylvia Sidney was born 107 years ago today in the Bronx. Her star was at its peak in the 1930s, but she continued to work well into the ’90s.

Here are 10 things you should know about Sylvia Sidney… 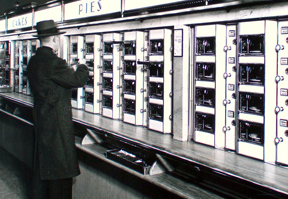 What sweeter treat could exist for any classic movie buff than to see oneself (or a more-than-reasonable facsimile thereof) on the silver screen in a movie from the 1920s, ’30s, ’40s, or ’50s?

No, we’ve not discovered our own cinematic doppelganger, though we’d like nothing more.

But we have found, over time, a handful of actors from the Golden Age of Hollywood who very strongly resemble prominent contemporary figures (and we’d love to hear from you, the members of the Cladrite Community, if you’ve found some we’ve missed).

Don’t you agree that, allowing for differences in the hair and make-up styles of their respective eras, these two are very close to a matched set? At the very least, Leeves would be an ideal choice to play Bond if ever there were a biopic called “The Lillian Bond Story” produced.

These very alluring mirror images are/were both English by birth, with Bond having been born and raised in London and Leeves making her debut in lford, Essex, and growing up in East Grinstead in Sussex.

Bond often played the “other woman” in pictures (as she does in the clip below), while Leeves has long specialized in comedic roles.

So while their careers may not have been similar, we think their facial features are strikingly so. And we envy Jane Leeves that—not because we wish we resembled Lillian Bond, but because we think it’d be fun to be watching an old movie late one night and suddenly see “yourself” acting in it.

Below are two clips featuring the actresses. The first features Leeves in an episode of Frazier; the second finds Bond appearing opposite the lovely Sylvia Sidney in a 1933 picture called Pick-Up. See if you don’t agree there’s a very strong resemblance.