We wrote last week of author Susan Waggoner’s collection of four books (so far) that look back at the way Christmas was celebrated during what we call the Cladrite Era. This week, we’re honored to share with you this guest blog from Ms. Waggoner, whose new book, Have Yourself a Very Vintage Christmas, focuses on holiday crafts, decorating tips, and recipes from the 1920s through the ’60s: 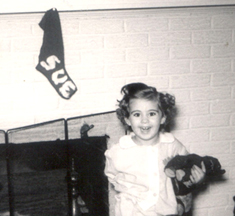 People sometimes ask me if, after writing four books on the subject, I am “Christmased out.” It’s hard not to laugh. Heavens, no!

Researching and writing these books has made me love Christmas even more, for now I have not only my own seasonal memories, but the memories of others to reflect on.

Like my friend Betty’s father, owner of a radio and record store in a small Cape Cod town, a real-life Santa Claus who spent all night every Christmas Eve delivering orders, so families could enjoy their new radios and television sets Christmas Day.

Or the young couple who, during the Depression, sacrificed their own presents to make Christmas dinner for 29 poor children, each of whom went home with a bag of candy and a toy.

I was very lucky, growing up, never to know deprivation. If my parents’ generation was the Greatest, mine was certainly the Luckiest. We were born into a world that had waited through a Depression and a World War for our arrival, to parents who’d grown up without gifts and were determined to make a different kind of world for us.

Children that we were, we took peace and abundance for granted, focusing our attention on Tiny Tears dolls, Easy Bake Ovens, Hot Wheels and Creepy Crawly Thingmakers.

I had a wish list as long as any child’s, and it seems to me I usually got whatever it was I most wanted. But I got something more important than toys from those early Christmases. From my parents and grandparents I inherited a long tradition of handmade holidays—of making decorations rather than buying them, of not just hearing the Christmas story at church but acting it out at home, in shepherd costumes of bedsheets and blankets.

My mother never purchased formal wrapping paper or place cards. She bought tissue paper and glitter and saved old Christmas cards, from which we were expected to create our own tags and wrappings, and the idea of going to a movie on Christmas afternoon instead of playing charades would have seemed a kind of sacrilege.

In remembering the things we did and made together, I remember who my parents and grandparents were. I remember the frugality that carried them through lean times and the creativity they cultivated even when times were better.

Their message still rings loud and clear: don’t always settle for store-bought, even when you can afford it. Add something of yourself. Try your hand. Find a way to make things special. Throw yourself into the fray and see what you end up with.

Whether in Christmas or in life, it’s a good lesson to remember.

Does any major holiday inspire the sort of nostalgia that Christmas fosters for so many? Yes, we chuckle to ourselves when remembering the dime-store Valentines we distributed to our classmates back in the day, and we recall with guilty fondness the mayhem we used to cause when playing with fireworks on Independence Day. Halloween inspires recollections of trick-or-treating, and Thanksgiving certainly yields its share of special memories,

But Christmas stands alone, in our considered opinion.

Apparently, author Susan Waggoner agrees with us. She’s built something of a cottage industry around books that celebrate Christmas past and present (but mostly past), and she’s not published just one or two but four such books, each as delightful and engaging as the last.

It’s a Wonderful Christmas: The Best of the Holidays 1940-1965 (2004) recalls Christmas as it was celebrated during World War II and the years after, a period many people consider the “golden age” of Christmas. Under the Tree: The Toys and Treats That Made Christmas Special, 1930-1970 (2007) revisits the must-have kids’ gifts of years gone by, while Christmas Memories: Gifts, Activities, Fads, and Fancies, 1920s-1960s (2009) traces the evolution of Christmas practices and traditions with the passing of the decades.

Waggoner’s latest, the recently released Have Yourself a Very Vintage Christmas, examines the crafts, decorating practices and food that were so key to Christmas from the 1920s through the ’60s.

All four volumes are chock full of vintage graphics, and they’re loaded with plenty of holiday trivia we’re betting you don’t know.

For instance, did you know that:

No, of course you didn’t know that, and neither did we (well, we know about the origins of the Macy’s parade, but not about Gimbel’s beating them to the punch!)

Any of these four volumes would make a great Christmas present for anyone who loves this season, and—perhaps even better—delightful host/hostess gifts to bring to those holiday parties that await you later in the month.

What’s more, we’re pleased to announce that Waggoner will be a guest blogger here at Cladrite Radio in a few days. We’re very excited about that, as we know she’ll share some very interesting stories about Christmas as it was celebrated in the earlier decades of the 20th century.

So check back—you won’t want to miss this.