Sunset Boulevard Archives ⋆ Page 2 of 2 ⋆ Cladrite Radio
Skip to content
Jimmy Starr began his career in Hollywood in the 1920s, writing the intertitles for silent shorts for producers such as Mack Sennett, the Christie Film Company, and Educational Films Corporation, among others. He also toiled as a gossip and film columnist for the Los Angeles Record in the 1920s and from 1930-1962 for the L.A. Herald-Express.
Starr was also a published author. In the 1940s, he penned a trio of mystery novels, the best known of which, The Corpse Came C.O.D., was made into a movie.
In 1926, Starr authored 365 Nights in Hollywood, a collection of short stories about Hollywood. It was published in a limited edition of 1000, each one signed and numbered by the author, by the David Graham Fischer Corporation, which seems to have been a very small (possibly even a vanity) press.
Here’s “The Ghost Run” from that 1926 collection. 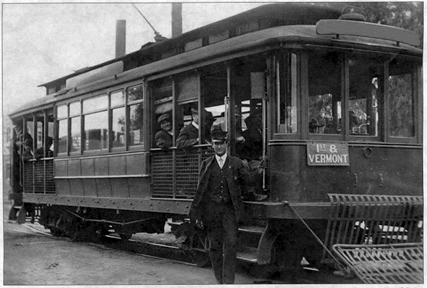 The last Hollywood car left the Hill Street station in Los Angeles at two-ten. There were few passengers.
It was called the ghost run.
The motorman dreaded it.
The conductor hated it.
Few of the passengers, if any, knew of the ghost run.
The massive red car clanged and rumbled along. The air brakes sizzled. Another stop. Another customer. The car groaned on its way.
A dirty-looking individual in the back lit a cigarette.
“Hey, can’t you see the sign: ‘No Smoking’ in here!” yelled the conductor.
The dirty-faced man reluctantly stepped on his cigarette.
The car rumbled on.
A middle-aged woman nodded in the front seat. The man in back of her rattled his early edition of the morning paper. A newsboy sat hunched in his seat reading a paper-covered novel.
The noisy clank of metal sounded as the car switched onto Hollywood Boulevard from Sunset.
The motorman turned on the power.
More noise as the car sped over the crossing at Western Avenue and Hollywood.
More power.
A hideous scream rent the silent night air!
“God! I’ve got her!” cried the motorman, jamming on his air brakes.
The sudden jar shook the passengers from their seats. The air-controlled doors slammed back as the conductor and motorman rushed from the car.
The sleepy passengers scrambled to the street.
An auto stopped and turned its spotlight under the front trucks of the heavy car.
The middle-aged women screamed and fainted. A man caught her.
The form of a woman lay mangled under the car trucks. men were pulling the body out. The sound of raising windows could be heard from near-by apartment houses.
Men shut their eyes on the sight.