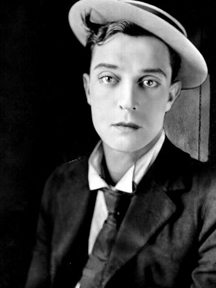 The inimitable Buster Keaton was born 117 years ago today.

It’s said by some that there are two kinds of people in the world: Chaplin fans and Keaton fans. If that’s so, then count us decidedly in the latter camp. We were introduced to Keaton by an old flame (thanks, C.D.), and we suspect that our wife fell in love with us in large part because we took her to see a different Keaton picture every Monday for eight weeks (thanks, Film Forum).

To mark the great man’s birthday, we offer you the following short, Cops (1922), that features our favorite single moment from his movies. If you’ve never seen a Keaton picture in a theatre, in the company of an appreciative audience, you must rectify that while you still walk this earth. You don’t have to take our word for it—just ask Ms. Cladrite!

The bit we treasure most comes approximately 15 minutes and 35 seconds into this video, but really, you should watch the whole thing. It’s only 18 minutes long, and we’re talking genius here. But if you absolutely must jump ahead, all you need to know is that Keaton is being chased by dozens of cops (doesn’t really matter why) and it’s the amazing way he escapes them in this gag that is so delightful. Start at the 15:00 mark, at the very least, to work up to the stunt we’re touting.

Five or six years ago, we spent a week with Ms. Cladrite in Los Angeles, and having purchased John Bengtson’s Silent Echoes: Discovering Early Hollywood through the Films of Buster Keaton, which includes info about dozens of locations used in Keaton’s pictures, we were able to find the spot where the above scene in Cops was filmed. It was the highlight of that trip for me to stand in that spot while Ms. Cladrite snapped a photograph.