Here are 10 things you should about Jobyna Ralston, born 123 years ago today. She’s best remembered today as a leading lady in some of Harold Lloyd‘s best films, but she enjoyed a varied, if brief, career in the 1920s.

Here are 10 things you should know about John Litel, born 129 years ago today. He was one of the busiest character actors of the 1930s and ’40s.

Jimmy Starr began his career in Hollywood in the 1920s, writing the intertitles for silent shorts for producers such as Mack Sennett, the Christie Film Company, and Educational Films Corporation, among others. He also toiled as a gossip and film columnist for the Los Angeles Record in the 1920s and from 1930-1962 for the L.A. Herald-Express.
Starr was also a published author. In the 1940s, he penned a trio of mystery novels, the best known of which, The Corpse Came C.O.D., was made into a movie.
In 1926, Starr authored 365 Nights in Hollywood, a collection of short stories about Hollywood. It was published in a limited edition of 1000, each one signed and numbered by the author, by the David Graham Fischer Corporation, which seems to have been a very small (possibly even a vanity) press.
Here’s “The K-9 Mystery” from that 1926 collection.
*    *    *
The K-9 Mystery 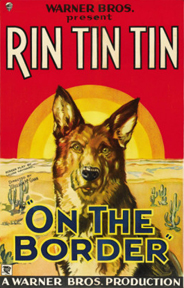 Fooling the public—what a great thing!
P. T. Barnum started it. Now there are over a million imitators.
Such is life!
What does it all mean?
(You probably say: “Ask Dad, He Knows,” which is a very good answer.)
You have all heard of a famous dog star?
If you have not seen him in pictures, you have at least heard of him.
Wonderful, you say.
Yes, perhaps. But listen!
The other day I visited some canine kennels and saw a number of clever dogs perform.
What I mean by perform is that they did routine work which displayed more than ordinary dog intelligence. I was amazed.
I asked the trainer about his dogs and also about the particular dog star.
He laughed.
“Why, that dog is dead,” he said calmly.
“Impossible!” I cried.
“Why”
I couldn’t say, but it did seem impossible.
“When did he die?” I asked.
“Some time ago.”
“There was no word of it in the papers.”
“There won’t be either,” he said dryly.
“I can’t see the reason why.”
“Well,—” He sat down on a box while the dogs played around him. “I’ll explain. You seem to be kinda dumb on the ways of enterprising people.”
I sat down on that.
“Well, supposin’ they went and announced that the dog had died. There would-a been a lot of silly sad remarks and millions of dollars would-a been wasted. The company back of the dog has spent heaps o’ dough puttin’ the hound over, and there was plenty of other curs which looked enough like him to take his place. Get the idea?”
At last a light dawned.
“So,” he continued, “they just kept his death a secret and got another dog to do his stuff, under the same name. The new hound is better than the first, I don’t mind tellin’ you, and they’ve got a bigger to make a pile o’ jack. You see, I know all this, because I bred the dog.”
That’s the canine mystery.
< Read "The Whistler" | Read “Just a Girl in Pictures” >
In this chapter from his 1932 book, Times Square Tintypes, Broadway columnist Sidney Skolsky profiles stage and screen actress Dorothy Gish.