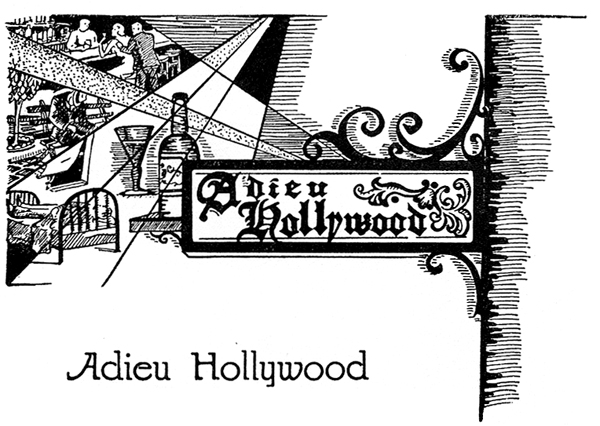 I have taken poison, he wrote courageously.
This is repeal night in Hollywood. Liquor is back, or will be, as soon as the zero hour arrives. It is announced in broad headlines across the newspaper I stole in order to read the Help Wanted ads; and from my hotel window, I can see gay throngs of people moving about in the streets. Huge trucks are unloading the night supply at various cafes; jolly revelers are eagerly waiting for the legal alcoholic moment.
People will soon enter those restaurants, where the law demands that a sandwich be served with every order of wine or bear. Most of the sandwiches will be ignored, served, and re-served as dummies. Yet I sit here starving—but not for long.
The reason for this, my last note, is to attempt to leave evidence which will prove my sanity. So I will write my thoughts rapidly until I fall from my position at the desk, and if—
Shouting caused me to look into the street again. Groups are forming in front of the already crowded cafes. Police are forcing people into long lines down the sidewalks.
I feel a strange sensation now in the nerve centers of my body. The poison has begun its sinuous effect.
Have just heard the opening blare of band trumpets. It is a salute from a band down Hollywood Boulevard. Quite a number of musicians are seated on a large truck which is decorated with colored bunting. Boys and girls are holding long streamers attached to the truck, as to a Maypole. It seems to represent some sort of float. Yes, a parade is forming.
My respiration is a little faster now, and there is numbness in my toes.
The truck has moved out in front of the paraders, and I recognize the music. Everyone is shouting the lyrics to that old song: “There’ll Be a Hot Time in the Old Town Tonight.”
I cannot see as clearly now. A fine mist has covered my eyes.
The band has stopped playing. No, they have merely changed tunes—to a dirge. Men are walking slowly behind the truck, carrying their hats across the left breast. Torches are being ignited all along the line of march.
My feet feel as if they have gone to sleep. The numbness is creeping slowly up my legs. The sensation is not painful, just a sleepy feeling.
The parade is much closer now. I see four men carrying an effigy on long poles, like an old-fashioned sedan. Torches have been applied to the dummy. Its feet are circled in a blaze. The crowd in the street immediately below my window are watching the approach. Laughter and jeering echo against the building, but it is all goodnatured fun.
There is a jumping sensation in the calves of my legs and about my knees. I feel somewhat nauseated.
There is a long banner being unfolded before the effigy, stretching across the width of the street. I will try to make out the lettering on it. It reads: “Burn the Blue-nose.” More than a hundred gay people have joined hands, dancing madly about the blazing dummy.
My stomach is burning very intensely now. My eyes are more misty. My nerves are giving little jumps with each heart beat.
The flames from the effigy are shooting into the air, touching the trolley wire. Confetti is flying everywhere. Office and hotel windows have been raised. Newspapers have been torn to bits and tossed down on the paraders. It looks like a snowstorm. The gayety is exceptional.