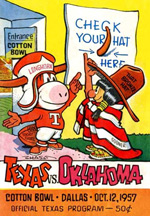 We spent the past weekend taking our dad from Oklahoma City down to Dallas for the Red River Rivalry, the Oklahoma-Texas game (we’re talking college football here, don’t you know).

Dad’s made his way to Big D for the big game every year but three since 1948, which means he’s been on hand for 58 percent of the 106 games played between the two heated rivals—a pretty impressive feat, in our view. The series, which kicked off in 1900, has been played in the Cotton Bowl, on the state fairgrounds (while the State Fair of Texas is underway, mind you) since 1929, and it’s a setting like no other in college football.

The stands are divided at the fifty-yard line—half the stadium’s sporting burnt orange, the other half crimson—and everyone’s out for blood (figuratively speaking, mostly). Dallas sits halfway between Norman, Oklahoma, home to OU, and Austin, Texas, where UT is found, so, aside from those locals who may have scored tickets, it’s an away game for everyone, and the fans behave accordingly (for good and ill).

Our Sooners took care of business in a big way this year—55-17 is an all-out beatdown in this typically competitive game—but we won’t bore you with video highlights from that big win. Those wouldn’t fall within this site’s purview.

Instead enjoy this five-minute roundup of the 1957 contest. The Sooners were 43 wins into their all-time record 47-game winning streak, and though the Longhorns made a strong showing, they would suffer their sixth loss in a row to the Crimson and Cream (OU was really good in the 1950s).

Enjoy the action, and note the fun narration throughout. If you like your football commentary alliterative, this is the clip for you.

P.S. If you missed the latest installment of Pitch Perfect on Monday, don’t fret. It’ll return on October 17. We’ve been dealing with computer issues over the past week, but we’re almost back up to speed.

The Oklahoma-Texas college football game takes place every year at the Cotton Bowl in Dallas, Texas, and has done so since the 1920s. The stadium is divided at the fifty-yard-line, with half the arena filled with Longhorn fans sporting burnt orange apparel; the other half with crimson-clad Sooners fans.

Virtually every season since 1949, our father has been seated on the OU side. It’s an annual tradition, a pilgrimage he makes every year (we’ve been in attendance ourselves most years since 1976, but we can’t match Dad’s devotion and consistency).

A new publication from Kesselskramer Publishing put us in mind of Dad’s annual trips to Dallas. The latest in a series of photography books entitled In Almost Every Picture, Volume 7: Shooting Gallery shares a story in images of a Dutch woman who has, almost every year since 1936, when she was 16 years old (only the years 1939-1945 are missing), had a photograph taken as she fires a rifle at a shooting gallery. She’s continued to visit the shooting gallery, even into her late 80s, and the annual photographs continue.

So what’s the connection beween the Dutch woman and Dad and his annual excursions to Dallas? Just this—how great would it be if we had sixty snapshots of Dad in his seat at the Cotton Bowl, one taken every season since 1949? Pretty damn great, we say.

We’re quite taken with the In Almost Every Picture series, and urge you to check it out for yourself.