Philip Strange Archives ⋆ Cladrite Radio
Skip to content
The seventh chapter from Hollywood Undressed, a 1931 memoir attributed to the assistant of masseuse and health guru Sylvia Ulback, a.k.a. Sylvia of Hollywood (but actually ghost-written for Sylvia by newspaper reporter and screenwriter James Whittaker), reveals the truth behind Sam Goldwyn‘s misbegotten and short-lived pairing of Ronald Colman and Constance Cummings. 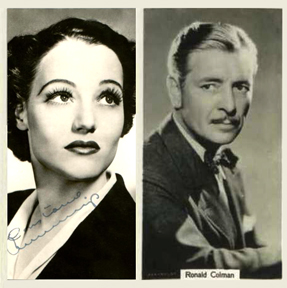 , and pretty near got Sylvia pinched.
Colman was living down in the Malibu Beach colony. Malibu is about the most unprivate community in the world. In the first place, the matchboard shacks are built so close together that when your neighbor takes off his shoes you call, “Come in.” But the movie people are used to getting in each other’s hair, and like it, all except Greta Garbo, who tries to stick to her own toothbrush. So the lateral propinquity, as you might call it, is not a drawback in Malibu. But the longitudinal propinquity—the nearness to sea water on the one side and an eternal automobile procession of fandom on the other side—sometimes creates trouble. You’re always finding a snail or a tourist in your oatmeal.
About the time that Sylvia went down to Malibu to look up Colman, there had just been an epidemic of peeping Toms and Thomasinas plaguing the colony. Of course, the ladies were bothered most. Fans with big goggle eyes on stems were emerging from behind the wall paper at all sorts of embarrassing moments. Believe it or not, films girls who would act in a De Mille production without thinking anything of it can get just as nervous as an Iowa schoolma’am about a funny scratching noise at the bathroom window.
But if you think it was only the girls that were bothered by peepers, you don’t know fandom. Every morning there was just as much excitement about the size-five footprints outside the boys’ windows as about the size-nines outside the girls’. The colony was all excited that Sunday morning when Sylvia reported at Colman’s shack for duty.
The boss walked in without knocking and got held up by an alarmed Filipino.
“Go ‘way, please,” he squealed, and shook a towel at her.
“Where’s Mr. Colman?” asked Sylvia with authority.
“In bed, please,” protested the Filipino, and got in front of Ronald’s door, where he prepared to die. “Go ‘way, lady!” he kept squealing.
“In bed?” said Sylvia imperturbably. “Good. That’s just where I want him. Let me by.”
“No ladies allowed,” quavered the Filipino, who was really frightened. “Be quiet! I call police!” And he got a desperate hold on the door knob of Ronald’s door and began to bleat.
His cries were answered by two men who popped out of guest-room doors. Sylvia recognized them as William Powell

and Philip Strange, two cronies of Ronald’s. But they didn’t know her at all. Strange took charge of the situation in a calm, haughty British way.
“Come now, my good woman,” he remonstrated. “Tell us what you want.”
Sylvia got wise to what was eating them and amused herself by feeding their panic.
“I just want to rub Ronald Colman,” she begged, trying to put a strange glitter in her eyes. “Just let me rub him once!”
“Oh, now, tut, tut!” soothed Strange.
The Filipino began again: “Go ‘way, lady, go ‘way!”
And Colman put a sleepy head out at the door to inquire what was wrong.
“This woman wants to rub you,” Strange explained.
“Well, why not?” yawned Colman. “She’s my masseuse.”
Strutting into Ronald’s chamber, Sylvia stole a backward glance at the nonplussed trio in the living room. She got a distinct impression that Philip Strange ball well didn’t approve of such goings-on.
The boss still counted Colman among her steady clients when she got mixed up in the series of errors that turned out to be comedy but might have been tragedy, and that established Constance Cummings

, the Broadway ingénue, as a newcomer in films.