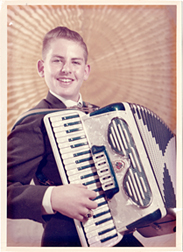 Ms. Cladrite recently made a purchase that yielded far greater treasures than she might ever have expected.

A couple of weeks back, we were strolling the aisles of Uncommon Objects, a vintage emporium in Austin, Texas, and Ms. Cladrite was taken by a portrait, dating, we guessed, from the 1960s, of a young man joyously playing the accordion.

The portrait was housed in an inexpensive picture frame, and we almost wondered if it wasn’t one of those generic pictures that come included in store-bought frames.

But no, it was not a commercial insert, but, as we confirmed upon extracting the picture from the frame, a studio portrait taken in December 1962.

The subject of the portrait was one James Thomas Dollins, and he was fourteen years old at the time.

Pleasing enough to come across a few details about this anonymous portrait, but imagine our surprise to learn that, hidden behind the shot of Mr. Dollins and his accordion, were three school portraits of Mr. Dollins, aged 9 and 10, two of them taken in 1958 and one in ’59.

We’ve undertaken a cursory onine search for info about Mr. Dollins, but haven’t found anything definite. A James Thomas Dollins Jr. was married to one Lucy Doll Murphy in Pasquotank County, North Carolina. I don’t know his age at the time of the ceremony, but Accordion Jimmy would have been 34 or so in 1982, so that’s a reasonably good match.

A James Terry Dollins was born in 1928 in Dallas, Texas. Given that he’d have been approximately twenty years old when Accordion Jimmy was born, it’s possible he’s Accordian Jimmy’s father—especially given the fact that James Terry’s father was named James Thomas. Perhaps James Terry gave Accordion Jimmy his father’s name as a tribute.