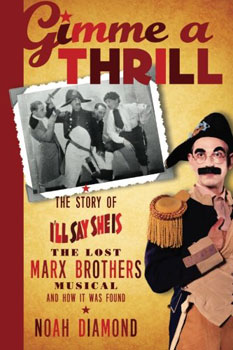 Many movie buffs and vintage pop culture aficionados know that the Marx Brothers worked in vaudeville for many years before breaking big on Broadway. Their second and third Broadways plays, The Cocoanuts and Animal Crackers, were adapted for their first two motion pictures, but the Broadway revue that made the Marxes stars, I’ll Say She Is, which opened at the Casino Theatre at 39th and Broadway in 1924, was never made into a movie; in fact, it was for decades a lost work. It has never been revived because no extant script was available, just bits and pieces.

That was until Noah Diamond, friend to Cladrite Radio and prenaturally talented individual (really, there’s nothing this guy can’t do), started researching this lost show with an eye toward reviving it for the first time in 90 years. He dug through the archives, finding snippets of dialogue, descriptions of the plot, sheet music for forgotten songs, etc., all in an attempt to piece together a more-than-reasonable facsimile of the Marxes’ first great triumph.

Noah’s efforts have finally paid off, as his recreation of I’ll Say She Is is finally receiving a fully mounted off-Broadway production in a mere matter of weeks (previews start May 28, opening night is June 2). But you needn’t wait till then to immerse yourself in the world of I’ll Say She is: Gimme a Thrill: The Story of I’ll Say She Is, The Lost Marx Brothers Musical, and How It Was Found, Noah’s engaging and informative account of the long march toward recreating and reviving the show is now available—in your choice of hard- and softcover—from BearManor and can be ordered now from your favorite online vendor and better bricks-and-mortar bookstores everywhere.

If you’ve an interest in the Marx Brothers (and who doesn’t?), Broadway history, show biz lore (or all of the above), you’ll want to own this delightful and informative account of how this once-lost show has been restored and revived. Given that the man responsible for this happy reclamation also wrote the book, you’ll be getting the straight scoop from the horse’s mouth, so to speak.

Buy it for yourself, buy it for the Marx Brothers fans in your life, buy it for us (as our copy will surely be worn out in short order)!

And if you want the REALLY complete story of I’ll Say She Is, don’t miss the next chapter in its history, May 28 through July 2 at the Connelly Theater; tickets on sale now at illsaysheis.com!