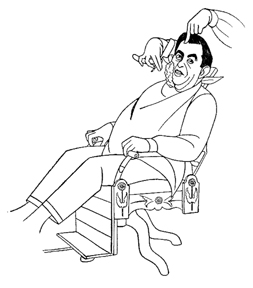 Was once a bricklayer and the vice president of a chemical company. From the experience gained at the latter he is proficient in making gin.
He wrote the song “Poor Butterfly,” with Raymond Hubbell and Charles B. Dillingham. In fact, his managerial career started on a song. His royalty check for “Goodbye, Girls, I’m Through,” was $40,000. Gave it to Mrs. Golden for a present. She loaned it back to him to produce Turn to the Right.
His favorite actor is Muni Weisenfrend. He never says this without adding: “And Otto Kahn agrees with me.”
Is very much interested in what makes an audience go to a play. Once distributed a circular during the run of Pigs inquiring, “What made you attend this show?” Seventy per cent of the answers were variations of “Because a friend told me about it.”
As a bricklayer he helped build the Garrick Theatre.
For the last thirty years the annual Lambs’ Washing has been held on his estate at Bayside.
He was a partner of Cohan and Harris in the production of Hawthorne of the U. S. A. His task was to pal about with Douglas Fairbanks, seeing that the young acrobat didn’t hurdle over taxicabs and climb up buildings.
He is superstitious. Likes to have a numeral in the title of his plays. Remember: The 1st Year, 2 Girls Wanted, 3 Wise Fools, 4 Walls and 7th Heaven. Considers 27 his lucky number. In roulette and other numerical games of chance he will bet huge amount on it.
He organized the Producing Managers Association. This led to the famous actors’ strike.
The man he quotes most is Ring Lardner.
Is not fussy about clothing. Never goes to a store to purchase wearing apparel. If he needs another tie, shirt or suit, he merely telephones for it.
Thinks Atlantic City and Miami are the only vacation spots worth knowing.
He is one of the few producers who treat the theater as if it were a business. Is in his office by nine every morning and leaves at five. Is in bed every night at ten. He never attends the theater in the evenings. Goes only to matinées. Misses every opening night. Even his own.
Owns the original Old Kentucky Home, having bought the Stephen Foster homestead in Federal Hill to save it from being torn down.
He realizes the value of flattery. Gets the most out of people he is associated with by using it.
His favorite tryout town is Elmira, N. Y. Believes it to be lucky and opens all his shows there.
Was the first to cover the front of a theatre with an electric sign. Did it with 3 Wise Fools at the Criterion. Then the movies took up the idea . . . And how!
He hates the word “clean.” Refrains from using it in his conversations. When it slips out accidentally, he looks embarrassed.
He has collaborated on songs with Irving Berlin, Douglas Fairbanks, Oscar Hammerstein, Victor Herbert and Woodrow Wilson.
Always puts on his glasses when he talks on the telephone.
His hobby is collecting “the key to the city.” He has framed in his office keys to twenty-seven of the most important cities in the United States.
He hates dogs and cringes when he sees one.
Has a barber shop in his office, fully equipped. Every day at twelve a barber appears and shaves him. Every other week he takes a haircut.
His home in Bayside has eight bedrooms. He sleeps in a different room each night, according to his mood.
Support Cladrite Radio on Patreon!