Not long ago, we came across a small etiquette manual for young men called Manners for Moderns. Published in 1938, it was written by one Kathleen Black and illustrated by North Young. This small volume offers a window into an earlier age that we found intriguing; we trust you will, too. We’ll offer a chapter a week, for the next seven Tuesdays.

Here’s the introduction, followed by Chapter One:

This book is written especially for young men. It has to do with everyday people and their everyday doings. Its pages are often humorous, because facts learned with laughter are most enjoyed and best remembered.

But, for all its mirth, the book has a thoughtful side, too. It aims to bring the problems of manners out into the light of day, where every reader can size them up according to his own interests and needs.

The book is of pocket-size so that it may be an out-of-school companion as well as a textbook for the classroom. In classroom or out, its purpose remains the same–to encourage an ever-increasing respect for the common sense of courtesy. 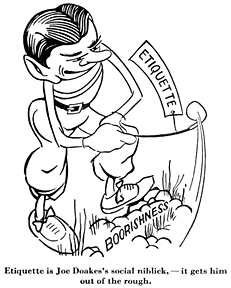 Have you heard about the sad case of Joe Doakes? Joe had Priscilla Ontop out the other night. The next day Priscilla rushed over to see her best friend, Gwendolyn Mazuma, and plunged into the conversation like this:

“My dear, I was never so mortified in all my life! You know that Joe Doakes, don’t you? Well,I let him take me to a movie last night. Never again! Let me tell you. . . .”

Gwendolyn’s younger brother overheard what Priscilla said, and in no time it was all over town. Poor Joe won’t stick his head out of doors and has tdAdmiral Byrd to ask when the next expedition leaves for the South Pole. His future certainly looks black, and the only out he can see is to get away from it all.

It isn’t as though Joe hadn’t had a chance to learn, but every time his mother or sister tried to show him some of the finer points of good manners he only sniffed:

Joe would have saved himself a lot of grief, if long ago he had taken pencil and paper and put down in black and white just exactly what he stood to gain by making good manners a part of his daily life. On another page he might have listed the little common things which everyone knows and practices every day that are nothing more than good manners. And would he have been surprised! For the truth about manners is simply this: We use at least some part of etiquette every day, and we couldn’t get along without it!

Does that sound too strange to be believed? Stop a minute and think it over.

If Pete goes out of his way to take you home in his car, don’t you say, “Thank you”? When you’re walking with Alice and she drops her gloves, don’t you pick them up? If you want to borrow Jim’s camera, don’t you ask for it politely? (Do you suppose you’d get it if you demanded it?) Haven’t you ever done an errand or mailed a letter because someone asked it of you? And don’t you sometimes ask people to do things for you?

All those things and a thousand like them are part of etiquette. And etiquette is nothing more than a system for getting along with other people.