Marquis Henri de la Falaise Archives ⋆ Cladrite Radio
Skip to content
The thirteenth chapter from Hollywood Undressed, a 1931 memoir attributed to the assistant of masseuse and health guru Sylvia Ulback, a.k.a. Sylvia of Hollywood (but actually ghost-written for Sylvia by newspaper reporter and screenwriter James Whittaker), reveals how a feud between the queen of the Pathé lot, Gloria Swanson, and young upstart Constance Bennett began. 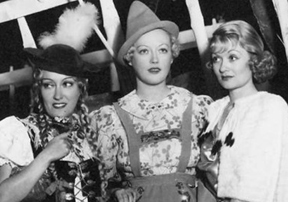 AND then, one day, Bennett had to wait because Sylvia was busy on Swanson. That was the match that touched off the fireworks.
They were waiting to be touched off, according to the rumors of a private difference between the two. Anyway, it was plain on the lot, from the first, that Connie and Gloria weren’t going to get along. It’s dangerous putting two such high-powered belles in the same county, let alone on the same movie lot, where all everybody ever does in idle hours is try to steal one another’s water coolers, jobs, mascara, and boy friends.
One thing you’ve got to say for Bennett: she doesn’t avoid a fight when she sees it coming. On the contrary, she sticks to the good old principle—applied equally by school kids, prize fighters, Napoleon, and professional belles—that the first sock is likely to win.
From week to week Bennett was getting more and more restless about the one thing on the Pathé lot that no one had ever yet dared to contest—the admitted fact that the sun was a big Klieg light created for the purpose of making a camera halo around Gloria Swanson’s hair, and that any of its light that happened to fall on anyone else was graciously permitted to do so by Swanson Productions, Inc.
It’s about time to take a side glance at one of the elements of this general situation which has been neglected—the snatching and grabbing of boy friends that went on under the surface. If you go back to the moment when all these ladies were in different parts of the earth, satisfied with their respective lots and loves, you find that, in the way of pairings, all were contented.
Ina Claire had her Gene Markey. Gloria Swanson had her Marquis Henri. Greta Garbo had her Jack Gilbert. Connie Bennett had her health.
Ina started the war when she busted up the combination by grabbing of Jack Gilbert. That left Gene Markey a lone wolf, and the long moonshiny nights in the Beverly foothills were filled with baleful bachelor bayings.
ANOTHER thing Ina did when she swooped out of the East and rustled herself a branded bull out of the contented herd was to set up a sort of self-conscious stir among the other females. Example is contagious.
And the wisest ones saw at a glance what was the trouble, the chronic Hollywood trouble, cause of most of the ructions that set the news wires periodically to humming.
Out here there aren’t enough Class A-1 boy friends to go around. What I mean is blue-ribbon boy friends with stars in their foreheads, the kind that throw sod over into the next pasture when they start snorting and pawing the ground.
At the time of Connie Bennett’s arrival there were only two real pedigreed prancing papas on the prairie—Jack Gilbert and the Marquis Henri de la Falaise. Others? Oh sure, there are others. But I don’t mean others. I mean sirloin. I mean the kind that can flip a hoof and shoot sand right over the Rockies into the Eastern public eye.