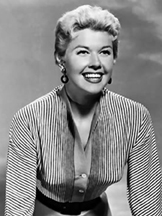 Doris Day is 88 years old today. She’s been out of the public eye for some time now and we wonder if today’s average twenty-something even knows who she is. we suspect not. But Day had a lengthy, varied and incredibly successful career.

Day, born Doris Mary Ann Kappelhoff in Cincinnati, Ohio, was a big-band songbird before she became an actress, performing with, among others, Les Brown and His Band of Renown and scoring her first hit, “Sentimental Journey,” at the ripe old age of 23. Her first film, Romance on the High Seas, followed soon thereafter in 1948, and she would also go on to make her mark in television, starting in a very popular sitcom, The Doris Day Show (1968-1973).

All totaled, Day made 39 pictures, recorded 650+ songs, was nominated for an Oscar, won a Golden Globe and a Grammy, and was, in 1989, the recipient of the Cecil B. DeMille award for lifetime achievement in motion pictures.

As of 2009 (and we feel certain nothing’s since changed), she still ranked as the top female box office star (sixth overall) of all time.

That’s quite a career, friends. So we are pleased to share with you both Day’s first hit record and the first chapter of Doris Day: A Sentimental Journey, a 1993 documentary of her life and career, narrated by Roger Ebert. You can view the other seven chapters here.