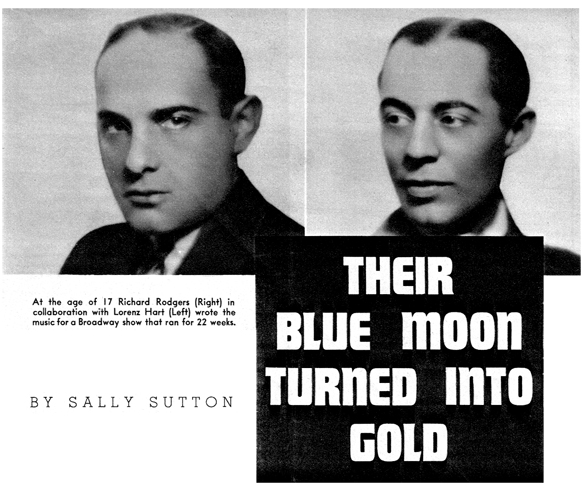 “However, after our Columbia show, Dick met Herbert Fields, a son of Lew Fields of the famous Weber and Fields Minstrels.
“Lew Fields was putting on The Poor Little Rich Girl, so Herbert asked his father to use some of our songs. By the time the show opened all of the songs were ours.
“The Poor Little Rich Girl ran 22 weeks on Broadway. Rodgers was then only 17. Of course we felt that we had arrived. We expected the managers to make us some offers. But no offers came.
“We put on amateur shows, benefits, and did anything we could to make a few dollars.
“Finally with Herbert Fields writing the book, Dick and I sat down and wrote a musical comedy. Then for months we made tours of auditions. Some managers liked the music and hated the lyrics, some loved the lyrics but couldn’t hear the melodies. Nobody took it.”
“What did you call it?”
Oh, it had some awful names. Then we all three wrote The Melody Man for Lew Fields. He took it on the road. Yes, it was a colossal—failure,” he finished.
We showed Dearest Enemy to Max Dreyfuss. He liked it, and now signed us up on his staff.
“This was in the month of March. The show could not open until Fall. We were unknown—and now very, very broke.
“We wrote Garrick Gaieties in a week. We used two or three numbers that we had been peddling around. One of them was Manhattan.
“At the opening matinee, I stood in the back of the theatre with a young writer about town, Walter Winchell. Three boys came before the curtain and recited that polysyllabic lyric! I felt like the thing was doomed.
“But that matinee, because of the long applause, lasted until seven o’clock.”