jass Archives ⋆ Cladrite Radio
Skip to content
Jimmy Starr began his career in Hollywood in the 1920s, writing the intertitles for silent shorts for producers such as Mack Sennett, the Christie Film Company, and Educational Films Corporation, among others. He also toiled as a gossip and film columnist for the Los Angeles Record in the 1920s and from 1930-1962 for the L.A. Herald-Express.
Starr was also a published author. In the 1940s, he penned a trio of mystery novels, the best known of which, The Corpse Came C.O.D., was made into a movie.
In 1926, Starr authored 365 Nights in Hollywood, a collection of short stories about Hollywood. It was published in a limited edition of 1000, each one signed and numbered by the author, by the David Graham Fischer Corporation, which seems to have been a very small (possibly even a vanity) press.
Here’s “A City Without a Pawnshop” from that 1926 collection. 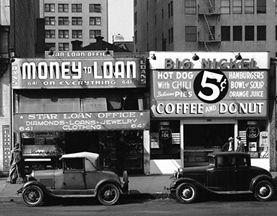 The boulevard was black and cold and shiny.
Once it had glittered.
Now it was deserted—unfriendly.
The rain tapped an incessant tattoo upon the street, the buildings and the window panes. It was a Ben Hecht rain—it was different.
Larry sat huddled in the doorway of an exclusive men’s furnishings store. The noise of water rushing down the metal drain-pipe kept him awake.
His shoes were oozing with water. His thin face was covered with a two days’ growth of beard. His colorless lips were tobacco stained.
What a creature!
A massive enclosed car swished by. Larry shivered and moved closer to the door.
The rain slackened. The sky was slowly growing gray. A heavy mist began to fall. The awning shook water on Larry’s haggard face.
He heard the scuffle of footsteps down the street. The street lamps seemed to be fighting for justice against the thick mist.
Larry was damp. He ached.
Old Joe, a studio watchman, stopped and looked at Larry. His blue eyes seemed to gleam in the obscurity.
“‘Lo Joe,” said Larry weakly.
“What’s the matter, son—no bed?”
“Hell, no, the damn car I slept in the last couple o’ nights at the auto park was sold yesterday and the rest of ’em have leaky tops.”
Larry grunted disgustedly.
“Well, come on, son, let’s have a cup of Java at John’s down the street.”
Larry shook himself as they entered the deserted cafe. Old Joe climbed upon one of the high stools at the counter.
A sleepy waiter set glasses of water before them.
“What’ll it be?” he asked.
“Cup o’ coffee for me,” muttered Larry.
“Naw, wait a minute,” interposed Old Joe, “make it two orders of ham an’ eggs. Do you want yours over, Larry?”
“Yes, thanks, Joe.”
The waiter slouched his way back to the kitchen. Soon he rattled a skillet.