James Branch Cabell Archives ⋆ Cladrite Radio
Skip to content
In this chapter from his 1932 book, Times Square Tintypes, Broadway columnist Sidney Skolsky profiles rotund orchestra leader and the King of Jazz (or so he was once known), Paul Whiteman. 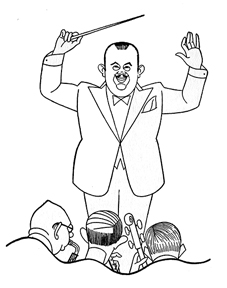 END_OF_DOCUMENT_TOKEN_TO_BE_REPLACED

The first thing one notices about him is his flaming red hair. He is five feet three and weighs 163 pounds. His skin is sun drunk. His hands are small and pudgy. He has the thighs of a burlesque queen. Standing, his body like a question mark, he appears ready to leap.
He works and talks at a breakneck pace.
He bites his finger nails.
His mother died when he was four. His father was a ditch digger. His uncle a horse thief. He was in an orphanage until eleven years old. Here, for his ability to memorize the preacher’s sermon and say catechism he won a rosary. But a more pious kid stole it.
Wears only five-dollar neckties and has his suits made to order by an anarchist tailor in Hollywood.
Is very proud that Mencken and Nathan are his pals and drink beer with him. Is prouder of this than their esteem for his books.
Started his literary career by writing fake stories for a “True Confession” magazine. One of his prize yarns was The Memoirs of a Japanese Geisha Girl.
His philosophy of life is: “What the hell—the grave ends everything.”
As a youth he looked forward to becoming the world’s greatest bank robber. Gave up the idea when told by a railroad detective he would be caught easily. Because no other person on earth could possibly look like him.
His first book, Beggars of Life, he submitted to four publishers simultaneously. The four accepted.
Likes to write in the first person. Believes a direct lie is always more convincing.
Was once a prize fighter. His pugilistic career ended in a California ring when he was knocked out in the first round and remained unconscious for twenty-four hours.
Combs his hair once a day whether it needs it or not.
The only thing he fears is a smart-aleck interviewer.
He has slept on a park bench, in H. L. Mencken’s bed, under a freight train, at the Algonquin, and on cold, barren ground, his closed eyes staring at the stars. No matter where he sleeps, he snores.
His name when a hobo was Cincy Red.
Always finds out where people were born, their ages, likes and dislikes, and secret sorrows by the second meeting.
He would like to conduct a society column for a newspaper.
Never wore a dress suit in his life. Thinks he would look like a chorus boy if he did.
His father, 78 years old, is still alive. He sends his dad press clippings, good and bad, periodically. His father is a bit disappointed because Jim didn’t become a champion prize fighter.
James Branch Cabell is his favorite American author.
He is very moody. Has intense fits of melancholy and terrible laughter.
Doesn’t think he should be judged by what he says about former friends in interviews but by the way he writes.
When interviewing he never takes notes. A week later he writes the interview from impressions.
He easily recognizes his own ability and is annoyed by those who don’t.
He wears high-laced tan shoes. They are made to order for him and imported from London.
From force of habit he greets an old friend with: “Did you eat yet?”
He lives and works in Hollywood. Writes in a big, oblong room on the second floor of his house. The room is lined with books from floor to ceiling. Has a flat, square desk with a swivel chair. A beer barrel is within swinging distance. He calls his house “One More Illusion.”
In writing a book he does not strive for literary style. Claims he writes naturally. Just as if he were writing a letter to a harlot.
He doesn’t smoke.
Jarnegan is his favorite character in all history. Claims that whenever he feels lonely and depressed he sits down and talks things over with him.
Makes women think his novels belie him because of his soft speech with them. When with men, however, he is just like his novels—turbulent and violent and cussing.
The two greatest guys in the world as far as he is concerned, are George Jean Nathan and Oklahoma Red.
He has a yen for beautiful and beautifully dressed women.
He dreads the thought that some day he won’t be alive.