We were mulling over the other day some of the posts we thought particularly fun that went live in the weeks and months before Cladrite Radio had accumulated much of a readership. Would it be problematic, we wondered, to revisit some of those posts, under the heading of Cladrite Classics?

No, we decided, it would not. Hence the following revisited offering, which first saw the light of day on May 13, 2010:

Though we’re committed New Yorkers, we wouldn’t mind a bit spending a few weeks—perhaps even a few months—a year in Los Angeles. We even find ourselves daydreaming about the City of Angels quite often.

And yet, we came around slowly on L.A. Our first couple of visits were enjoyable enough, but we didn’t find the city particularly engaging. After a trio of week-long sojourns there over the past decade or so, though, we’ve been won over.

We view the city through a movie buff’s eye, primarily, and so spend our time motoring about checking out movie stars’ homes, vintage movie palaces, and locations that were used in the filming of some of our favorite classic pictures (though we’re also happy just puttering through the various old neighborhoods south of the Hollywood hills—we love the residential architecture in old L.A.).

We didn’t snap the photos shared below; we bought them at a flea market some years back. They’re snapshots taken around Hollywood and its environs back in the day. How old they are, exactly, we’re not sure—we’re inclined to think they’re from the late 1930s, but we’re open to guesses from you, gentle readers. (For larger views, just click the images.) 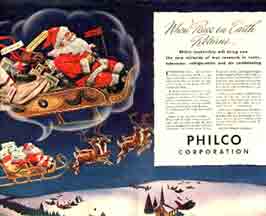 We figure most folks will find themselves in one of two camps over the next few days.

The first group will be those who got a bit of a jump on their seasonal activities. They’ve purchased and wrapped all their gifts, mailed their cards, gotten the grocery shopping completed for any holiday meals they’re to prepare, so now they spend the next few days relaxing and savoring the festive mood that surrounds us.

The second group, bless their hearts, have accomplished few to none of the above-cited tasks, and will be frantic and out of breath for the next 72 hours or so as they fight the crowds to squeeze in some last-minute shopping; sign, stamp, and lick, and mail their cards, and drive all over town from grocery store to understocked grocery store looking for all the ingredients required for the holiday meal they’re expected to whip up.

To the second group, we say, “Good luck and Godspeed—we don’t envy you.” Because, the rigors of a little holiday travel aside, we’ve completed our own seasonal tasks and intend to relax and enjoy ourselves through the weekend.

One way we in the first camp might pass the time is with some Christmas-themed old-time radio programs from the good folks at OTRcat.com. They traffic in reasonably priced collections of classic radio shows from the Cladrite Era, but for the next few days, you can listen to a full dozen holiday programs for free.

A number of genres are featured: mystery-horror, variety shows, dramas, cop shows, private eye programs, and comedies, among others.

We’re sharing below an episode of the “Lights Out” program entitled “Uninhabited” that originally aired on December 22, 1937, in which, as the folks at OTRcat describe it, “a French, Australian, and African-American soldier find themselves traveling on a train on Christmas Eve 1918.” But if the likes of “The Jack Benny Show,” “The Great Gildersleeve,” or “Dragnet” are more to your liking, you’ll find those streaming at OTRcat.com.

We think you’ll find the offerings at OTRcat well worth your consideration, and at these prices—free!—they certainly can’t be beat. So put your feet up and relax—you’ve earned it!—as you enjoy some Christmas entertainment from the 1930s, ’40s, and ’50s—when you’re not listening to Cladrite Radio, that is.

(P.S. We have absolutely no connection to OTRcat.com. We just like old-time radio, and we appreciate any outfit that’s willing to share samples of their wares gratis.)

We’re going to take it easy for a few days following Christmas, but until then, we’ll keep our noses to the grindstone. And we’re pleased to present you with a few surprises in the coming days. Each day this week, we’ll share with you a Christmas episode of some of our favorite old-time radio programs.

Today, it’s an episode of The Jack Benny Program from December 20, 1936, entitled “An Old-Fashioned Christmas Party.”

We love Jack Benny, and if you’re not familiar with him (so strange to think that anyone might be unfamiliar with Jack Benny, but such is the passage of time), we think you will, too. To our ears, his humor seems less dated than so much humor of the 1930s and ’40s.

Give a listen and see if you don’t agree!

The witty and erudite Dick Cavett has a new book out. Talk Show: Confrontations, Pointed Commentary, and Off-Screen Secrets is a collection of the very worthy opinion columns Cavett’s written for the New York Times over the past few years, and in that book he tells a story about Jack Benny that is one of best we have ever heard.

We spent several years in the 1990s tending bar at Mickey Mantle’s Sports Bar on Central Park South, and if we hadn’t guessed already that fame came with a price, we certainly learned that lesson in our time at Mantle’s, where we saw not only the Commerce Comet himself deluged by fans, many of whom behaved questionably, but dozens of other celebrities as well, from both the sports and entertainment worlds. (Just as an aside, O.J. Simpson, who had not then yet fallen afoul of the law, was the one celeb who created the most excitement when he dined at Mantle’s. The buzz in the room while he was there was palpable.)

We don’t consider it telling tales out of school to say that we saw the Mick have run-ins any number of times with customers who had crossed a line, and generally, there was blame to be placed on both sides. In Mickey’s case, to be frank, alcohol generally played a role in his turning surly, and on the customers’ side — well, alcohol again often played a role in their penchant for placing unreasonable demands on the former slugger. After all, even a Hall of Famer likes to enjoy a brief meal with friends from time to time.

It’s that double-edged sword of adoration that Cavett’s story about Benny touches upon, and so aptly. The finish is a little coarse, for the more sensitive souls among the Cladrite community, but frankly, we wouldn’t change a word of it. It just goes to show how even a soul as gentle as Benny—by all reports, the loveliest and gentlest of men—can be beaten down by the devoted attention of fans.

As Cavett tells it, here’s how the story goes:

When Jack Benny first came on a show of mine, I suddenly blurted, “Isn’t it a drag, Jack? Constant recognition?” To my surprise, he blurted back, “I like being famous!” A rare admission at any time.
He elaborated: “I go to a night club, I get a good table. I go to the theater, I get the best seats. At the country club, the steam room attendant gives me the best towel.” Then came, delightfully, “And ya know, kid, what the best part is? People are generally glad to see me.”
I declined to remind the great man of something I had witnessed years before when I was writing for Jack Paar. Mr. Benny, as I then called him, was on that night’s Paar show, and when taping was over I made my habitual point of getting into the elevator with one of my heroes. So did a bunch of audience members. The son of Waukegan looked smart in his belted, classic Burberry.
For what follows, younger readers will need help with the trademark Jack Benny references, so dear to the memory of those of a certain age.
First, someone asked, “Do you still drive the Maxwell?” Then came, “Are you really cheap?” This of course triggered, “Do you really keep your money in that underground vault?” Before we reached the main floor there was time for several more, including the inevitable, “Do you really not pay Rochester much?”
Realizing that he must have become numb to being asked these same questions for decades, you had to admire the gracious way he nodded and smiled. He was a very nice man.
When the doors opened, the civilians all rushed out to astonish their friends with reports of whom they had met and actually spoken with.
Jack put his arm around my shoulder and in that soft voice, said, “Ya know, kid, sometimes ya jes’ wanna tell ‘em to go fuck themselves.”

Speaking of Dick Cavett, we’ve had occasion to meet him a few times over the years. Not in any formal setting, but just bumping into him at various spots around the city. As fellow Groucho Marx devotees, we’ve felt comfortable in approaching Mr. Cavett and telling him of our appreciation of his work and our shared admiration for Groucho, and he’s always been nothing less than gracious and warm.

We honestly think you could do much worse than to buy his book for several of the people on your holiday gift-giving list.

Though we’re committed New Yorkers, we woulnd’t mind a bit spending a few weeks — perhaps even a few months — a year in Los Angeles. We even find ourselves daydreaming about the City of Angels from time to time.

And yet, we came around slowly on L.A. Our first couple of visits were enjoyable enough, but we didn’t find the city particularly engaging. After three week-long sojourns there over the past six or seven years, though, we’ve been won over.

We view the city through a movie buff’s eye, primarily, and spend our time motoring about checking out movie stars’ homes, vintage movie palaces, and locations for favorite classic pictures (though we’re also happy just puttering through the various old neighborhoods south of the Hollywood hills — we love the residential architecture in old L.A.).

We didn’t snap the photos shared below; we bought them at a flea market some years back. They’re snapshots taken around Hollywood and its environs back in the day How old they are, exactly, we’re not sure — we’re inclined to think they’re from the late 1930s, but we’re open to guesses from you, gentle readers. (For larger views, just click the images.)